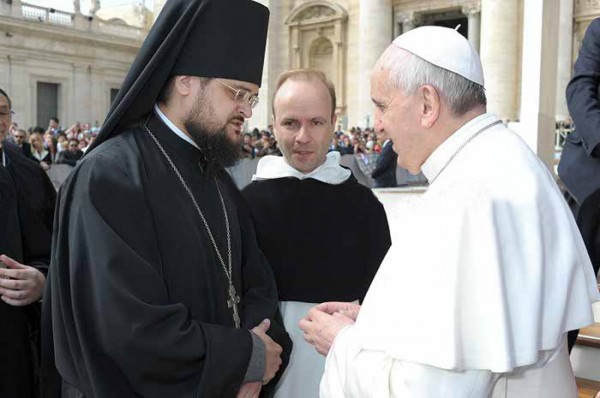 On April 2, the DECR delegates attended the general audience of Pope Francis at St. Peter’s Square and later met with the Pope. They conveyed greetings from His Holiness Patriarch Kirill to Pope Francis who asked them to convey his warm greetings and best wishes to the Patriarch and also to Metropolitan Hilarion of Volokolamsk. An importance of developing bilateral relations between the Moscow Patriarchate and the Holy See was noted during the talk.

The guests from Russia were introduced to social ministry of the Community of Sant’Egidio and met with its general secretary, Prof. Adriano Roccucci.

Hieromonk Stefan (Igumnov) and Rev. Alexey Dikarev visited the Russian parish of St. Catherine in Rome and attended Matins at which the Great Canon of St. Andrew of Crete was read. Archimandrite Antoniy (Sevryuk), rector of the church and secretary of the deanery of the Moscow Patriarchate parishes in Italy officiated at the service.