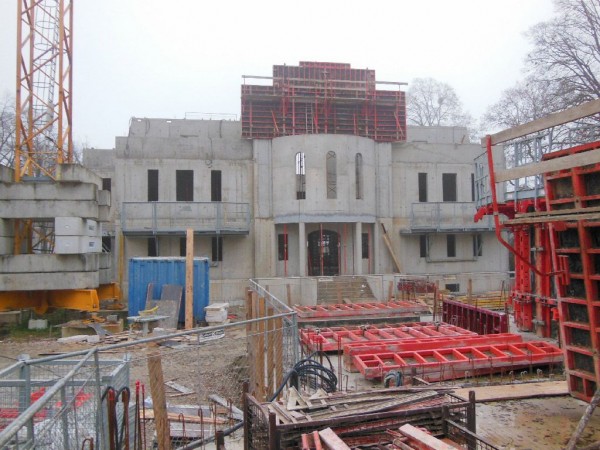 “Builders have almost finished the erection of the concrete construction for the parochial house. There are only some details left. Now, in order not to let abundant Alsace rains fill with water all the premises, it is necessary to make a roof. We expected the works on erecting wooden construction of the attic floor and the roof to start any day,” the parochial website reports.

At the same time the building of the church is under construction. Its subterranean floor was made earlier. Its altar apse has been recently been completed. Today there is a task to collect at least certain amount of the total price of the church concrete construction that is evaluated in €1,6 million.

The idea of building the church appeared after establishing the Parish of All Saints in 2003 and the Representation of the Russian Church at the European Council in 2004. It took several years to negotiate with the city authorities on allotting land, to work out the project of the church, to register all necessary administrative and engineering documents.

Besides the church, a parochial house is being built at the land lot, that is to become the Russian Cultural Center.

Most viewed articles
Number of Christians Murdered for Faith Rose 60 Percent in 2020: 50 Most Dangerous Countries to Be a Christian220
God Is With Us… And Nothing Else Matters131
Building a Fire and Preparing for Theophany103
A Little Light and the Darkness Will Become Heaven93
I Have Fought the Good Fight, I Have Completed the Race67
Churches to Reopen in Greece on January 1866
Metropolitan Hilarion: Actions of Extremists Caused Serious Imbalance in the Centuries-old Christian-Islam Relations in Syria49
Another Cleric of the Ukrainian Orthodox Church Attacked in Zaporozhie34
The Light of Epiphany6
Most popular authors
Charlene Aaron220
Pravmir.com team149
Fr. Gabriel Bilas131
Fr Gregory Scratch103
Protopresbyter Themistoklis Mourtzanos93
Metropolitan Hilarion (Alfeyev)67
Priest Luke A. Veronis6