Russians and Americans Gather to Pray Together in English Near Moscow

Source: Russian Faith
Fr. Joseph Gleason | 27 May 2018
In the heart of Russia, just north of Moscow, it is encouraging to see Russians and Americans going to church together, worshipping together, and using both English and Russian to pray together. The Christian Faith truly creates a bond which bridges oceans. 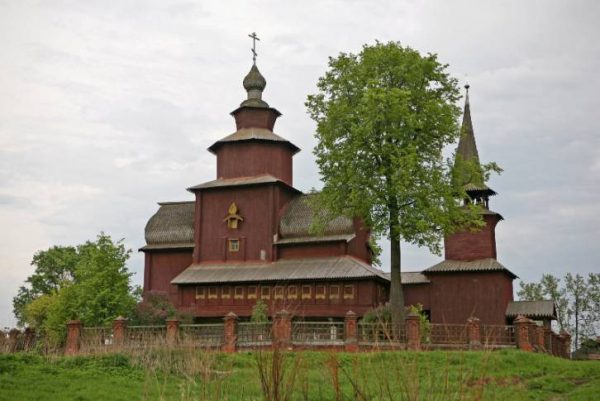 Every year on May 21, Russian Christians gather in churches to pray, and to pay their respects to the Apostle John. He walked with Christ as one of the twelve apostles, he was exiled to the island of Patmos, and he wrote five books of the New Testament, including the famously cryptic book of Revelation. The apostle John is widely known as “the Theologian”, which in Russian is translated as “Bogoslov”.

Named for the apostle John, the little Russian village of Bogoslov is just a few kilometers south of Rostov the Great. This year in Bogoslov, a Christian group of Russians and Americans met together to honor St. John the Apostle. The service was held in both English and Russian, and it was celebrated in one of the most unique and historic churches of Russia’s Golden Ring.

The church of St. John the Theologian was built in 1687, near the banks of the Ishna river. It is widely known as one of the oldest existing wooden churches in Russia. Numerous excellent online photos of this historic church are available for viewing. This historic church was even featured in the first episode of Raskol, a television series about the violent church schism in 17th century Russia.

Three local Orthodox priests came together for the molieben (prayer service) in honor of St. John the Theologian. They were joined by a group of faithful Christians, both from Russia and from America. The service alternated between English and Slavonic (old Russian), and Psalm 51 (50) was sung in English, in the ancient western Orthodox style of Gregorian Chant.

When is the last time English was spoken inside this historic church in the heart of Russia? It is hard to say, but it may have happened over a century earlier, in 1913, when Tsar Nicholas II visited this very church. He and his wife Alexandra were fluent in English, and whenever they wrote letters to one another, it was always in English. They had conversations in English as well. So if he needed to say something discreetly, and he wanted to avoid eavesdroppers, English may have been a natural choice. But of course we will never know for sure.

What we do know is that this year, English was not only spoken, but sung, inside this beautiful Russian church. People from two continents joined their voices, and joined their hearts, showing that the Christian faith brings people together, and breaks down every barrier, whether political, geographical, or linguistic.

And that is something worth celebrating, regardless of what language you speak.