Source: OCA
Many have offered “thoughts and prayers,” but others are finding such sentiments to be empty, reflexive ways to absolve themselves of the responsibility to act.
Natalya Mihailova | 25 February 2018 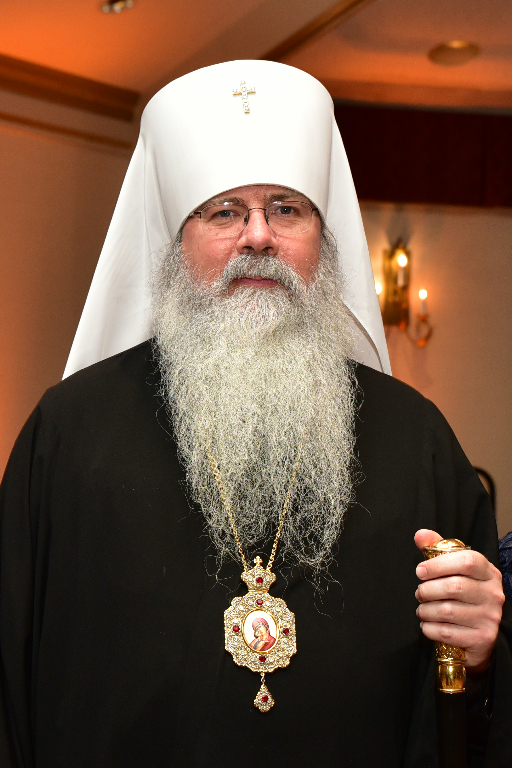 In a letter dated February 22, 2018, His Beatitude, Metropolitan Tikhon addressed US President Donald J. Trump with regard to what has been widely described as “one of the world’s deadliest school massacres” that occurred at Marjory Stoneman Douglas High School, Parkland, FL on Wednesday, February 14.

The text of Metropolitan Tikhon’s letter appears below and is available in PDF format.

It is with a heavy heart and deep sadness that I write to you in the aftermath of yet another violent assault which has murdered and wounded students and teachers, leaving our nation and people in grief and fear.  The tragic shooting at Marjory Stoneman Douglas High School in Parkland, Florida, took place last week just as Christians throughout our country were beginning Great Lent, the period of prayer and repentance which prepares us for the feast of the Resurrection.  It was yet another reminder of the fallen world we live in and of the reality of death.

It was also a reminder of the responsibility we have as people of faith to care for the least of our brothers and sisters, most especially our children.  This is not an easy task.  We struggle to find ways to console family and friends, and to answer the hard and fair questions of those who are now grieving.  Many have offered “thoughts and prayers,” but others are finding such sentiments to be empty, reflexive ways to absolve themselves of the responsibility to act.  Yet prayer is a crucial part of our reaction to such events: prayer of mourning, prayer for healing and consolation, and—as we often find in the Psalms—prayer offered in exasperation and horror.

Sin is personal, but it is also corporate.  It is our responsibility to consider our soul as a nation, and to ask the difficult question as to why such killings—in schools, on campuses, in public gatherings, in churches, with automatic weapons—happen here so much more than they do anywhere else.  Many of us have already made up our minds about the problems and the solutions.  And there is as yet little or no meaningful dialogue between those of us who have done so.

Too often our debates reduce human beings to easy labels such as “predator” and “prey,” “oppressor” and “oppressed.”  There may be some truth behind such characterizations, but they do not convey the full dignity of the human person – and all of us are human persons, struggling to figure out how to live peacefully in this difficult world.  We know there is but one way to heal the affliction of evil, and that is by the goodness that comes from Jesus Christ.

Mr. President, a few weeks ago you offered the following words at the Annual March for Life: “Under my administration, we will always defend the very first right in the Declaration of Independence, and that is the right to life.”  You also stated: “That is why we march.  That is why we pray.  And that is why we declare that America’s future will be filled with goodness, peace, joy, dignity, and life for every child of God.”

With increasing frequency, the citizens of our nation are confronted by evil, conflict, sorrow, ignominy, and death.  As Orthodox Christians, we understand that these are realities of human existence, and our communities are committed to maintaining the sanctity of all life through our efforts to reach out and minister to all, to bring healing, and to instill peace. But we also require the active contribution of our civil authorities in stemming the onslaught of tragedy that faces our nation.

Mr. President, we ask for your leadership in this.  We ask you to keep our schools safe so that our children may not suffer the anxiety of an unsafe environment.  We ask you to do everything you can to prevent another Columbine, another Sandy Hook, another Parkland.  Please know that in the prayers of our churches throughout the United States we ask God to grant mercy to our country, to our civil authorities, to our armed forces and to you as our President.

As we enter into Great Lent, reflecting on our own sinfulness and surrendering ourselves to the merciful God, we also yield to the same reflection and surrender as a nation, before God.  As we do so, we are mindful that our Lord Jesus Christ, Who is our Judge, knows by experience on the Cross the murderous effects of human passion.  We bow down before Him, begging His mercy on the victims and their families, on the first responders, on all who have been especially touched by this event.  And in this we ask his mercy on us sinners, and on our nation.