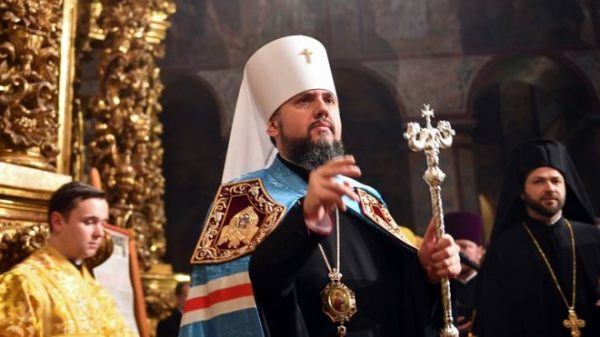 Kiev, February 3, 2019 – Epiphany Dumenko was enthroned at St. Sophia’s Cathedral in Kiev today as the “Metropolitan of Kiev and All Ukraine” of the Ukrainian schismatic church created by Constantinople on December 15.

The “unification council” held that day combined the schismatic “Kiev Patriarchate” and the schismatic “Ukrainian Autocephalous Orthodox Church” into one group, though they both continue to legally exist. Patriarch Bartholomew then granted a tomos of autocephaly to Epiphany Dumenko who was elected as primate at the “council,” in Istanbul on January 6, though no other Local Church recognizes this tomos. And today, on his 40th birthday, Epiphany was formally enthroned as primate.

As a number of outlets are reporting, including the Ukrainian site Strana, few parishioners and guests attended the enthronement Liturgy, although the police and national guard had prepared for a large crowd. No representatives from any Local Church other than Constantinople arrived for the celebration.

As was expected, no Local Church other than Constantinople was represented at the enthronement. Constantinople’s delegation included Metropolitan Emmanuel of Gaul, who had presided over the “unification council,” Metropolitan Amphilochius of Adrianople bishops of the Ukrainian Churches in America and Canada, and Abbot Alexios of Xenophontos Monastery on Mt. Athos, who can be seen in the video of the enthronement.