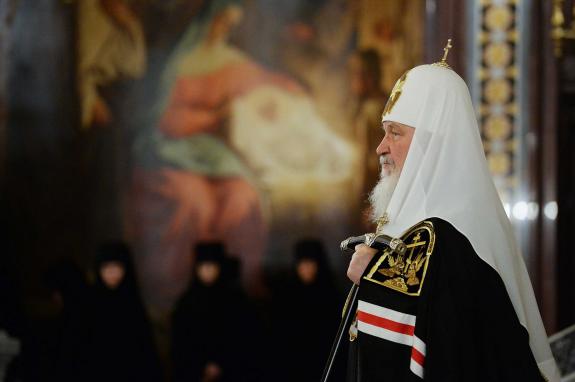 A deep wound has been inflicted on the canonical Orthodoxy in Ukraine and worldwide, His Holiness Patriarch Kirill of Moscow and All Russia wrote in the letters addressed to the Primates of the Local Orthodox Churches.

As His Holiness Patriarch Kirill informed them, on December 15, a gathering of “hierarchs,” “clergy” and laity of two Ukrainian schismatic groups took place in Kiev with the direct involvement and under the direct patronage of the government authorities of Ukraine. The participants in that unlawful assembly at the historical Sophia Cathedral in Kiev proclaimed themselves “unification council.” That so-called unification was, in fact, a merger between two schismatic organizations which formed one. Taking part in the “council” were false bishops of the schismatic “Kievan patriarchate” and of another uncanonical structure – “Ukrainian autocephalous orthodox church.”

“Meanwhile, the canonical Ukrainian Orthodox Church led by His Beatitude Metropolitan Onufry of Kiev and All Ukraine, recognized in the entire Orthodox world, refused, in accordance with the decision of its Holy Synod of December 7, to participate in this event, considering it an “unlawful gathering.” Despite the fact that the archpastors of the Ukrainian Orthodox Church were brought under enormous pressure, out of its 90 hierarchs only 2 (one diocesan and one vicar) took part in the pseudo-council. For falling into the schism and flagrantly violating the episcopal oath they both were relieved of their posts and suspended from serving by the decision of the Holy Synod of the Ukrainian Orthodox Church of December 17,” the letters said.

His Holiness reminded the Primates that the process of “granting autocephaly to Ukraine” had been instigated by the secular leader of the country who pursued his own political goals. “The gathering that took place in Kiev only confirmed the fact of the government’s open interference in church life,” Patriarch Kirill noted. President Petro Poroshenko was not only present at the “council,” he actually sat in its presidium, personally overseeing the meeting. Taking part in the “council” was also a Greek Catholic, Andriy Parubiy, chairman of the Verkhovna Rada of Ukraine, who announced the vote due to be taken in the next few days on the bill to abolish the Ukrainian Orthodox Church’s right to be called in accordance with its statutory name. “This renaming is aimed at re-registering all the parishes and monasteries and making void the documents indicating the rights of the canonical Church to church buildings and other church property,” His Holiness said in the messages.

“It grieved us deeply that among those who took part in the gathering, hostile towards the Church, were representatives of the Patriarchate of Constantinople, thus disregarding the sacred canons and violating ecclesiastical rules,” the Primate of the Russian Orthodox Church wrote in his letters, “Metropolitan Emmanuel of France presided at the council of the schismatics, having at his right hand Mr. Poroshenko who had taken communion with the Greek Catholics, and at his left hand excommunicated Filaret Denisenko and Makary Maletich who has no apostolic succession.”

As His Holiness Patriarch Kirill emphasized, the sad result of that unlawful gathering was the election of the “primate” of the so-called “Orthodox church of Ukraine” – Sergei Dumenko, a schismatic “hierarch” of the self-proclaimed “Kievan patriarchate” who had received all his pseudo-ordinations and even “monastic tonsure” with the name Yepifany from defrocked and anathematized Filaret Denisenko. The “primate” elect hastened to publicly announce that Filaret would retain for life the title of “patriarch emeritus” and would “all his life help us develop our unified local Ukrainian orthodox church.”

“The Ukrainian authorities and the Church of Constantinople present this act of outrage upon justice as unification of the Ukrainian Orthodoxy,” His Holiness said in the letters, “However, there was no unification. The schismatics were and still are outside the Church. Even having merged with each other, they are still a minority on the Orthodox map of Ukraine.” His Holiness pointed out that according to the governmental statistics produced by the Ministry of Culture, the canonical Ukrainian Church has 12,348 parishes, which is twice as much as the total number of parishes making up the new pseudo-church structure. The canonical Ukrainian Church has 10,424 clergymen, 211 monasteries and 4,721 monastics.

“The Ukrainian Orthodox Church is the largest religious organization in Ukraine. At the Council of Bishops that took place on November 13, this year, the episcopate of the Ukrainian Orthodox Church that has a status of wide self-governance within the Moscow Patriarchate unanimously spoke out in favour of retaining this status, for preserving the centuries-old unity with the Russian Church. Yet, the Ukrainian authorities are doing all they can to sever these historical ties,” the letters read.

His Holiness noted that, having merged with each other, the schismatics did not make the major step – they did not repent in the sin of schism and return to the Church which they had left and from the unity with which they had fallen away. What is going on instead is the legalization of the schism under the guise of “autocephaly” by the Patriarchate of Constantinople.

Patriarch Kirill reminded the Primates: “It is these very actions that His Holiness Patriarch Bartholomew, in the presence of the Primates of the Orthodox Autocephalous Churches at the Synaxis in Chambésy in January 2016, promised not to take prior or after the Crete Council.” Breaking this word has led to a tragedy in the Orthodox world, the head of the Russian Orthodox Church emphasized. “The unlawful action carried out on December 15, means that ninety bishops, over ten thousand priests, deacons and monastics and tens of millions of the faithful of the canonical Church all over Ukraine do not exist anymore for the Church of Constantinople simply because they refused to be involved in the project of granting “autocephaly” that was forced upon them and want to build up their church life in compliance with ecclesiastical rules and not with political ambitions of the authorities,” the messages said.

As His Holiness Patriarch Kirill of Moscow and All Russia pointed out, on the following day after the “council,” December 16, Patriarch Bartholomew of Constantinople officially recognized the election of the “primate” of the schismatic structure, whose name was already commemorated during the Liturgy in the Patriarchal Church of St. George, and announced that he would grant the so-called tomos of autocephaly on January 6, next year. That same day, in the Cathedral of St. Vladimir in Kiev, Filaret Denisenko said that as patriarch emeritus he would for life govern the unified schismatic “church” together with the “primate” elect who would represent this organization in external relations.

“We are eyewitnessing the unlawful interference in the internal life of the Ukrainian Orthodox Church, the gross anti-canonical encroachment on its territory, the deepening of ecclesiastical division among the Orthodox people and the aggravation of the schism in the Ukrainian Orthodoxy,” His Holiness said in his letters.

He mentioned that in the recent past the Orthodox world had faced a similar threat to the Orthodox unity caused by the schism that tormented the Bulgarian Orthodox Church in the 1990s. Then, as now, the government authorities of the country actively supported the schismatics’ activities. “Back then the most important step taken to restore the unity in the Local Church was the Pan-Orthodox Council in Sofia,” His Holiness noted, “Among those earnestly speaking out in favour of convening it was the Moscow Patriarchate. Although His Holiness Patriarch Bartholomew of Constantinople suggested resolving this matter through the legalization of the schism and voluntary resignation of the legitimate Primate of the Bulgarian Church – His Holiness Patriarch Maxim, the Plenitude of Orthodoxy defended the rights of the canonical Church and its First Hierarch, laying rightful canonical foundation for overcoming the schism.”

“And now it puzzles us how the voice of millions-strong canonical Church in Ukraine can go unheard,” His Holiness Patriarch Kirill wrote, “It is my firm conviction that what is being unfolded in Ukraine these days is not a conflict of interest between the Moscow Patriarchate and the Patriarchate of Constantinople, as some people are trying to present it, but something much more dangerous: a profound deviation of the Primate and hierarchs of the Most Holy Church of Constantinople from the Orthodox canonical tradition and patristic ecclesiology. The time is coming when it becomes impossible to keep silence, for what is going on in our plain view is posing a challenge to the entire Orthodox world. There is no doubt that the Ukrainian scenario can be enacted in future with regard to any other Local Church.”

His Holiness Patriarch Kirill of Moscow and All Russia called upon the Primates of the Local Orthodox Churches not to recognize the results of the unlawful gathering of the schismatics which had taken place in Kiev, as well as to raise their authoritative voices and do all within their power to stop the actions, devastating for the Orthodoxy. “I call upon you and the plenitude of your Most Holy Church not to recognize the newly established pseudo-church structure and not to enter into communion with it,” His Holiness said in his messages.

“I ask for your holy prayers for the persecuted Ukrainian Orthodox Church, for our suffering brothers and sisters subjected to abuse and humiliation for their faithfulness to the Holy Orthodoxy,” with these words His Holiness Patriarch Kirill addressed the Primates of the Local Churches in conclusion of his letters.