The fact of the infliction of damage to the shrine is recognized even by the Turkish media.
Pravmir.com team | 30 June 2022 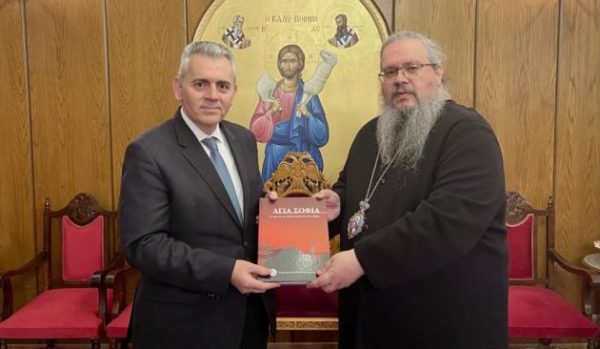 Hagia Sophia of Constantinople is in danger of irreversible destruction following its conversion into a mosque stated Maximos Harakopoulos, Secretary General of the Inter-Parliamentary Assembly of Orthodoxy (IAO), member of the Greek Parliament, during his meeting with Metropolitan Jerome of Larissa and Tyrnavos, a hierarch of the Greek Orthodox Church. The meeting took place on June 28, 2022, reports orthodoxianewsagency.gr.

“The imprint of Hagia Sophia in the Orthodox world is especially strong, and the churches that today are dedicated to the Wisdom of God, such as, for example, the recently built holy church in the city of Larissa, testify to this fact. Unfortunately, the symbol of Universal Orthodoxy, Hagia Sophia in Istanbul, after being converted into a mosque, is in danger by the daily presence of tens of thousands of visitors who use the monument even for an overnight stay,” said Maximos Harakopoulos.

He presented Metropolitan Jerome with the book “Hagia Sophia. Temples of the Wisdom of God all Over the World” and informed him about the “campaign to raise awareness of international public opinion” aimed at protecting the shrine. Mr. Harakopoulos also spoke about the recent damage to the monument, the fact of which is recognized and condemned even by the Turkish media. In particular, they warn that if this situation continues, the Temple is threatened with destruction by 2050.

“The damage to the historic seven-meter Imperial Gate, the transformation of the vestibule into a shoe rack, the scratching of the walls by “pilgrims”, the broken ancient marble of the floor – this is only the beginning of the deliberate destruction of the world cultural heritage monument that has adorned Istanbul since the 6th century,” said Maximos Harakopoulos. “And all these are the inevitable consequences of arbitrariness and profanity on the part of the Turkish leadership, which turned the Cathedral into a mosque, made the law of power and conquest the highest principle, and, at the same time, turned Turkey into a state of denial of universal human values.”

The Secretary General of the IAO stressed that “there are no geopolitical and economic calculations in this action,” however, unanimous condemnation and sanctions from the international community are required, which “will force Ankara to reverse its decision before it is too late.”