Should Orthodox Christians Kneel on Sundays? 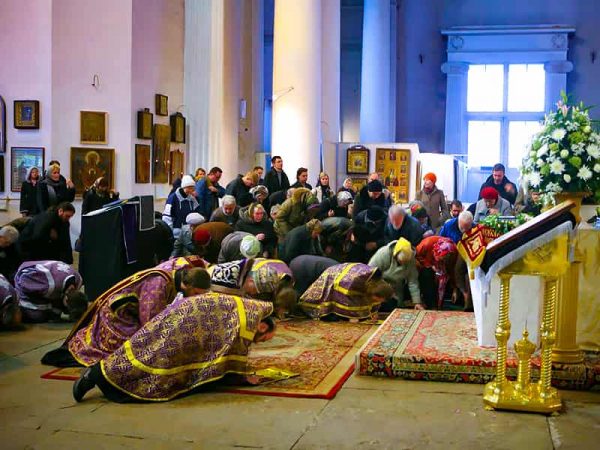 By Archbishop Christodoulos of Athens

The issue of kneeling on Sundays continues to engage clergy and laity, due to the fact that diametrically opposite views have been formulated concerning this practice.

On the one hand there are those who claim that this practice is prohibited by the Sacred Canons. In particular, Canon 20 of the First Ecumenical Synod states that no kneeling should be practiced on Sundays and during the period of Pentecost. According to this canon, kneeling, it states, is not consistent with the joyous and Paschal character of these days, because kneeling is an expression of repentance and for godly sorrow.

On the other hand, there are other who make the opposite claim. They argue that kneeling at the time of the blessing of the Bread and Wine, at the point we say “Your Own from Your Own we offer…,” is not a kneeling of sorrow, but of worship which is done because of the miracle which is effected at that moment by the God of our worship.

There is also a third category of theologians, who claim that kneeling on Sundays is neither recommended nor prohibited. It is simply tolerated, wherever it is enforced and observed.

There is no doubt that those Christians who kneel on Sundays, do not do this out of irreverence, but out of great piety. They do it because they have been taught that at the point when we say “Your Own from Your Own we offer…,” awe-inspiring mysteries take place: the Bread and the Wine that are used in the Eucharist are changed by the invocation (epiklesis) of the Holy Spirit into the Body and Blood of Christ. At the same time, however, it is certain that these Christians have not read the Sacred Canons, and have not studied the Holy Fathers. They simply behave according to what their Christian conscience dictates, without realizing that their behavior violates the order of the Church.

In the following paragraphs, we try to present in an analytic and objective manner the various aspects of this issue in an attempt to specify what is right and should be followed by the faithful Christians.

A. What does the Term Kneeling (In Church) Mean?

The sacred canons on lesser and proper kneeling: Before we proceed to the next step, it is useful to observe what the Sacred Canons mean by the term kneeling in church. To begin with, kneeling in church is an ancient religious tradition, whereby the people who are at prayer express their faith. Such kneeling is distinguished by two types:

Firstly, there is the kind when a person that prays bends the knees while holding the boy upright and looking towards the foreground. This position is usually accompanied by simultaneous crossing oneself. It is the position we take at the Vespers (Esperinos) of Forgiveness, i.e., the Vespers (Esperinos) of Pentecost, (Indeed, the first prayer of this Vespers alludes to this in saying, “offering supplication by bending the neck and inclining the knees”). (Note: This is the Vespers special service that we at St. Andrew conduct following the Divine Liturgy on Pentecost.)

Secondly, there is the type when a faithful rests on his knees on the ground, places his hands on them and bends down his forehead onto the earth, or when he is standing up and decides to go down on the knees to the point that his face touches the floor and then stands up again. This is repeated several times.

Kneeling and repentance: The first kind of kneeling is called a minor repentance, and the second, major repentance are practiced in the Presanctified Divine Liturgies, at the point when the Holy Gifts pass by the faithful. Greater use of them is made by Monastics, and sometimes spiritual masters impose these major repentances as a penance on those Christians who have sinned and repented for their sins. Saint John the Faster introduced this tradition of penances, and called the major type of (church) kneeling simply kneeling. Basil the Great closely identified repentance and the prostration.

When do we kneel and when do we not kneel in church: A differentiation is made between the minor and the major types of kneeling in the Kollyvadian Book of Liturgical Rubrics of the erudite economos Father George Regas of Skiathos, Greece, where we read the following: “Repentances (metanoies or prostrations), are of two kinds, minor and major. The minor ones are the prostrations we do when we cross ourselves and bow only our head without bending the knees. These minor metanoies (repentances) are done each day and on many occasions throughout the day without ceasing. The major metanoies or prostrations are characterized by the bending of the knees. These are never allowed on a Saturday or Sunday (apart from the Feast of the Precious Cross), but are done only during the Great Lent and on any day except Saturday and Sunday.”

On Sundays we neither kneel nor fast: Along with fasting, the Sacred Canons prohibit kneeling on Sundays.

Saint Basil the Great says in his Canon 91: “We offer our prayers on the first of the Sabbaths (Sunday) in a standing position.” The reason is basically the fact that Sunday (Kyriaki) is the day of the Resurrection of our Lord and consequently we are obligated to remain standing in an upright position as resurrected persons. Besides, every Sunday (Lord’s Day) is a symbol of the eighth day, i.e., of the age to come and for this reason the Church trains and teaches the faithful to remember the age to come and to be prepared to welcome it in an upright position which indicates vigilance. “In which (Sunday) the upright position of prayer should be preferred as the stipulations of the Church have trained us to do, so that by a sort of active reminder our mind transmigrate from the present to the future realities.”

The view of the Holy Synod of the Church of Greece. “On the matter of kneeling the Committee proposed the following: ‘That kneeling on Sunday is not required at the Consecration and is not imposed. It is simply tolerated.”

“There is no reason to allow the infiltration into the Divine Liturgy of personal and sentimental elements which change its character. Also, there is no need to try to find on every occasion pretexts or explanations of deviations which are not approved by the Church. The Divine Liturgy is not a personal affair. The Church lays down the order and she has specified that Paschal character of the Divine Liturgy which stresses the Resurrection and which has been from the beginning associated with Sunday. We do not need to prove the Paschal character of the Divine Liturgy which is connected with the Resurrection and the Last Things (Eschatology). Besides, the Church prohibited the celebration of the Divine Liturgy on days of fasting and this, of course, has been today restricted to the Period of the Great Lent, but the primary sense still remains intact: the Divine Eucharist is an eschatological event and cannot be anything else but a celebratory occasion, full of joy and radiance.

[Please note: Whether one kneels or does not is not an issue in the Greek Orthodox Archdiocese of America as far as I know. It is simply tolerated. The majority of Greek Orthodox Christians and clergy always kneel during the Consecration (Epiklesis), the invocation of the Holy Spirit, for no other reason than reverence, humility, a sense of sinfulness, a sense of unworthiness, and acknowledgment of the Great Miracle taking place at the time of the Consecration and no other reason. No Orthodox Christian deliberately sets out to violate the Sacred Canons of our Church. The joy of the Resurrection and of the Divine Eucharist remain undiminished.]

“Glory Be To GOD For All Things!” – Saint John Chrysostomos

Most viewed articles
Metropolitan Hilarion of Eastern America and New York to Be Buried in Jordanville on May 22171
Patriarch Kirill: The Peoples of Russia and Ukraine Have No Interest in the Conflict163
Communion restored between the Serbian Orthodox Church and the Macedonian Orthodox Church – Ohrid Archbishopric119
Metropolitan Hilarion of Eastern America and New York Reposes in the Lord117
What Do We Celebrate at Mid-Pentecost?101
Metropolitan Onuphry: One Needs to Search for the Truth in Spiritual Life, not Easy Ways85
Celebrating 100 Years with Paschal Joy64
Patriarch of Serbia to Concelebrate with Archbishop Stephen of Ohrid41
Family Life and Spiritual Warfare28
China’s Internet Clampdown Is Step Closer to ‘Cancelling Christianity’10
Most popular authors
Pravmir.com team696
Ioannis Foundoulis101
Priest Luke A. Veronis64
Archpriest Michael Gillis28
Donna Birrell10