Sitting at the Feet of Jesus

Source: OCA
Fr. Steven Kostoff | 15 November 2015
Jesus then asked him, “What is your name?” And he said, “legion;” for many demons had entered him. And they begged Him not to command them to depart into the abyss. Now a large herd of swine was feeding there on the hillside; and they begged Him to let them enter into these. So He gave them leave. Then the demons came out of the man and entered into the swine and the herd rushed down the steep bank into the lake and drowned. When the herdsmen saw what had happened, they fled, and told it in the city and in the country. Then people went out to see what had happened, and they came to Jesus, and found the man from whom the demons had gone, sitting at the feet of Jesus, clothed and in his right mind; and they were afraid. And those who had seen it told them how he who had been possessed with demons had been healed [Luke 8:30-36]. 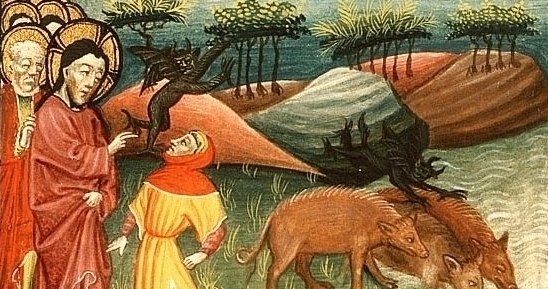 The text above—a partial account of the healing of the Gerasene demoniac—served as one of two epigraphs for Fyodor Dostoevsky’s gripping novel that was titled, simply, Demons.  (The novel has also been translated, less accurately, as The Possessed).  For Dostoevsky, living and writing in 19th century Russia, the “demons” were the newly emerging revolutionaries who were not only determined to overthrowing the Russian monarchy, but also committed to abolishing belief in God and the Orthodox Christian culture that was shaped by that belief.  Aspiring to such a radical rejection of the prevailing political, social, cultural, and religious order, these revolutionaries were named “nihilists,” for they believed, essentially, that nothing was sacred or beyond their desire to destroy.  Out of the ashes of this nihilistic disorder something resembling a utopian society was to emerge, now cleansed of any dead remnants from the past.  Dostoevsky was hoping that the nihilistic revolutionaries of his era would self-destruct as did the demons—called “legion”—of the Gospel account.

In his compelling novel, this is precisely what happens, but Dostoevsky was enough of a realist to realize that the outcome could be different, especially with the decay that was eroding the effectiveness of the very institutions he was hoping would withstand such an onslaught. And the reality was that this nihilistic orgy of violence would occur in the generation following his death in 1881. Thus, Dostoevsky uncannily “prophesized” the later Russian Revolution that engaged in precisely such a sweepingly destructive movement against what was considered a God-established order.  But the person who would repent of such nihilistic tendencies and to return to faith in Christ was to enjoy the transformative experience of “sitting at the feet of Jesus clothed and in his right mind.”  Demons proved to be an unforgettable artistic actualization of the Gospel account of the healing of the Gerasene demoniac and what it means to turn to Christ.

It is only in Saint Luke’s account that we read that wonderful verse of the healed demoniac sitting at the feet of Jesus.  Yet, the story of the Garasene demoniac also appears in the Gospels of Saints Mark and Matthew. It is thus a story that must have made a strong impact on the early Church.  Details will differ—Saint Matthew actually records the healing of two demoniacs instead of one—but the intense drama of this narrative cannot but stand out against the bleak background of the rugged landscape, the tombs where the demoniac[s] lived in isolation, and of course the cliff with the abyss below that swallowed up the herd of trampling and frenzied swine.  It is an account that more-or-less assaults our modern sensibilities.  The realm and reality of the demonic and the “spiritual warfare” implied by recognizing such a realm and reality opens up our minds and hearts to both the irrational and supra-rational world of the Gospel in which Christ has come to “bind” the “strong man.”  This is a fierce battle that demands a greater commitment to Christ and the Gospel than conventional Sunday morning church attendance.

It is just such a deeper commitment that will perhaps “reward” us with sitting at the feet of Jesus “clothed” in our right mind.  (A weaker commitment may mean that we are content with standing in the back of the room at a safe distance and only occasionally listening—or listening only when we hear something that appeals to us, while shutting out the “hard sayings.”) Sitting at the feet of Jesus implies listening to His words, allowing them to penetrate our hearts, and acting upon them to the extent that we are able.  We claim that Christ is the “Lord and Master” of our lives.  Such a claim means that there is really no other place that we want to “sit” and absorb and be nourished by what we are hearing.  To be in our “right mind” does not simply mean that we have not been diagnosed with a clinically defined mental disorder.  It implies a clarity of vision and a “worldview” grounded in the reality of God’s existence and gracious presence.  It also means freedom from moral, ethical and spiritual disorders.  Perhaps to sit at the feet of Jesus and to be clothed and in our right mind indicates a state of spiritual sanity.  With a surrounding world engulfed in modes of behavior that can only be considered “insane,” the Church remains the “place” where we retain our sanity.  That may take some time and some work. The “demons” must first be expelled. We must fear the abyss of destruction that swallows up the possessed swine of the Gospel account.  Then we can join the ranks of the saints and sit at the feet of Jesus “clothed and in our right mind.”