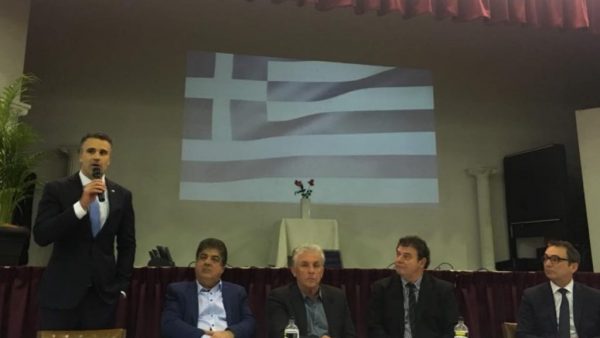 Representatives from various ethnic groups united at a meeting on Monday night at Adelaide’s Olympic Hall to give a helping hand to those devastated by the wildfires in Greece.

Over 30 leaders from associations across South Australia’s Greek, Cypriot, Italian, Jewish, Islamic, African and Indian communities were in attendance, along with members of Parliament and community members.

Organised by the Greek Orthodox Community of SA (GOCSA), the forum’s primary aim was the formation of a coordinating committee to ensure assistance offered to beneficiaries is targeted and effective.

He explained that the committee would increase public confidence that collected donations will reach individuals and groups that are most in need.

“We are getting phone calls not just from the Greek community but from the public asking how we can help and where do we contribute funds.
“We want to make sure everything is above board and done in a transparent manner.”

In response to the fire catastrophe in Greece, the GOCSA has joined forces with local Greek associations in partnership with the Bank of Sydney and Delphi Bank to establish a Community Relief Fund, amongst other undertakings.

The proceeds aim to support people across the Rafina region and other fire affected areas in Greece.

Following a minute’s silence at the beginning of the meeting in respect for those who lost their lives in the disaster, speakers including Premier Steven Marshall, Opposition Leader Peter Malinauskas, SA Best MLC Frank Pangallo, and former Director of Public Prosecutions Stephen Pallaras QC addressed those gathered.

Mr Marshall praised the support that was shown at the meeting.

“It is this kind of community spirit that will sustain these Greek communities and families that lost everything last week,” he said.

A South Australian aid package is expected to be announced in the coming days, with the support of the state’s opposition.

Among suggestions heard, was also the organising of a fundraiser at this weekend’s AFL game between Port Adelaide and the Adelaide Crows.

It is hoped that the coordinating committee will be able to set up a plan for the distribution of collected donations within the next eight weeks.