Updated: State of Emergency in Greece as Wildfires Continue, Leaving at Least 50 Dead

Source: Neoskosmos.com
The worst fires Greece has experienced in over a decade, one of the youngest victims believed to be a six-month-old baby
Pravmir.com team | 24 July 2018 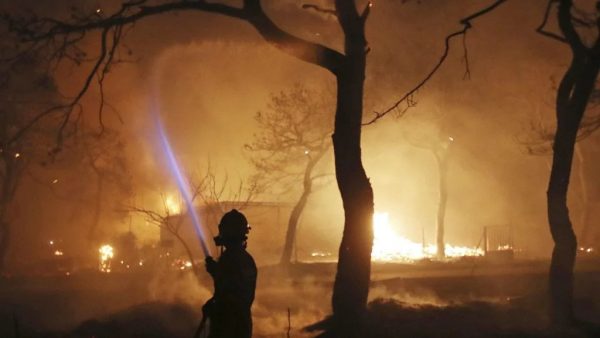 Smoke rise over an avenue during a forest fire in Neo Voutsa, a northeast suburb of Athens, Greece on Monday. Photo: AAP via EPA/Alexandros Vlachos

Authorities have declared a state of emergency, as forest fires rage out of control east and west of Athens, resulting in at least 50 deaths and over 100 people injured. One of the youngest victims is believed to be a six-month-old baby who died due to smoke inhalation.

Twenty-nine kilometres east of Athens, in the seaside village of Mati, which is at the centre of the disaster, the Red Cross in Greece reported that 26 bodies were found in a villa’s yard.

“Mati doesn’t even exist as a settlement anymore,” a woman told Skai TV.

The fires are the worst Greece has experienced in over a decade, seeing dozens of homes destructed. With a cloud of black and orange smoke having descended across the city, transport services have been disrupted, the main Athens to Corinth motorway shut and train services cancelled.

Greece has since sought international assistance from the EU to assist with containing the fires.

It is believed the blaze started in a ravine located in the mountains overlooking Kineta, a resort town some 54 kilometres west of Athens.

At least 150 firefighters were called to the scene as five water-dropping planes and seven helicopters assisted from the air.

By late afternoon on Monday, the second major fire started in the Penteli area northeast of Athens.

At least three aircraft, a helicopter, and 50 firefighters set out to battle the blaze.

Authorities have urged residents located within the vicinity of the fires to abandon their homes.

“People should leave, close up their homes and just leave. People cannot tolerate so much smoke for so many hours,” said senior fire chief, Achilleas Tzouvaras.

“This is an extreme situation.”

Mayor of the Rafina-Pikermi area, Evangelos Bournous claimed he saw at least 100 homes and 200 cars in flames.

“I saw it with my eyes, it is a real total catastrophe,” he said.

Greek prime minister Alexis Tsipras was away in Bosnia when the fires broke out, and has since cut the visit short to return home.

“We will do whatever is humanly possible to control it,” he said.

In addition to fire fighting services called in from across the country, the army was also drafted to help.

Meanwhile in addition to the rising death toll, a number of people have been reported missing, some of whom are said to be tourists. According to Greece’s coastguard, a search-and-rescue operation is under way.