The St. Alexander Nevsky Church in Khabarovsk Has Burned Down and its Benefactor Been Killed

Source: Pravmir.ru
A strong, gusty wind prevented the swift extinguishing of the raging fire. However, firefighters managed to prevent the fire from spreading to neighboring buildings.
Natalya Mihailova | 06 April 2014
April 5, 2014. PRAVMIR. In Khabarovsk, on the night of April 5, the St. Alexander Nevsky Church burned to the ground. That same night the church’s benefactor, who helped build the church, was killed, the site of the Khabarovsk Diocese writes. 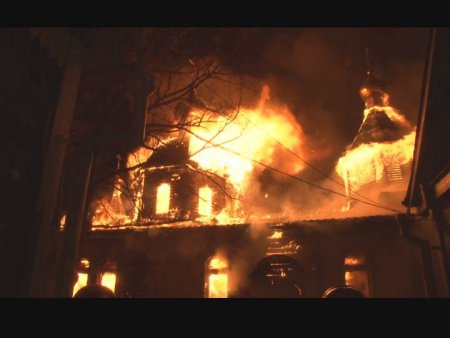 A journalist from the news portal RIA “Vostok-Media” was told by Yulia Kalashnikova, a representative of the Russian Ministry of Emergency Situations press service (Khabarovsk region), that clergymen had first tried to extinguish the flames by themselves. When this failed, they called the firefighters. The first units arrived within five minutes, yet by that time the fire had engulfed an area of ​​around 200 square meters. Extinguishing the fire was hindered by a strong, gusty wind. However, firefighters managed to prevent the fire from spreading to neighboring buildings.

Fourteen units of firefighters struggled with the fire for nearly two hours. The interviewee of the news portal noted that the wooden church building is currently being watered down and dismantled. A review of the damage and a determination of the fire’s cause will be done later. Representatives of the Khabarovsk Diocese, together with the fire inspectors, will be engaged in this process.

Metropolitan Ignatius of Khabarovsk and Amur related these events on his personal blog:

“Yesterday, late at night, I received a late phone call from Fr. Oleg Hutorskoy, secretary of the Diocese. He reported to me the murder of Vladimir Fukalov, our steadfast benefactor and energetic assistant in many of our ecclesiastical affairs. At six in the morning, I again received a phone call, and I heard noise and shouting on the phone line. From Fr. Basil Didenko, I learned that the St. Alexander Nevsky Church, which had just recently been completely restored, had just burned down. Both priests are saddened, yet they had not lost their strength of spirit.

“I also try not to lose strength of spirit. Right now I am going to serve Liturgy, where I will pray with Vladyka Gury of Arsenyev (he came to visit us for two days, with an educational seminar). I will pray for the repose of God’s servant, Vladimir. Then I will visit Fr. Basil and the parishioners of the church. To talk, help, comfort.”

As Natalya Garaeva, press secretary of the Outer Manchuria Diocese relates, to help participate in the church’s restoration, please call +7 (914)203-9089 to speak with Valery Andreevich Meshcheryakov, assistant to the rector of the St. Alexander Nevsky Church on economic matters.

The church’s current bank account number will be published following decision of the parish church council.