The fate of the main shrine of the Dormition Church - the Miraculous Kazan Icon of the Holy Theotokos - is yet unknown.
Pravmir.com team | 25 February 2020 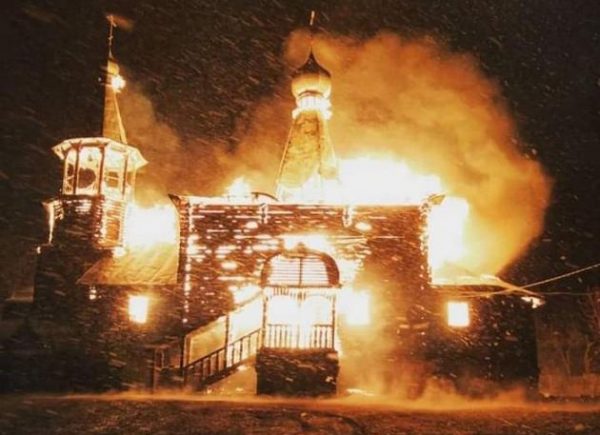 A wooden seven-domed church in honor of the Dormition of the Most Holy Theotokos burned down in the village of Podborki in the Kozelsky district of the Kaluga region at night on February 23, 2020, Kozelsk-eparhia.ru reports.

According to preliminary data, the cause of the fire was a short circuit in the wiring of the domed part of the church. The liturgical building burned down completely. All that remains of the church complex is a Byzantine-style font. The fate of the main shrine of the parish – the miraculous Kazan Icon of the Mother of God – is yet unknown.

The Dormition Church was built in 1992 on the site of an ancient stone church, blown up during the Great Patriotic War. In its beauty, it was compared to the architectural ensemble in Kizhi.

The diocese started a fundraising on the restoration of the shrine.