One of the many paradoxes of the Orthodox Christian life, abstinence from sensual things is what restores and sanctifies nakedness. By sin Mary found herself naked in fornication and prostitution, but by abstinence she found herself naked like an innocent child before God.
Archpriest Thaddaeus Hardenbrook | 09 April 2011 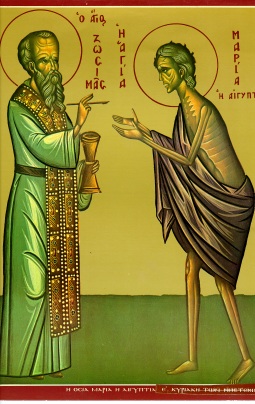 Icon of St. Mary of Egypt

Sermon on the Sunday of St Mary of Egypt

From the very beginning of the Fall, sensuality has plagued man. It originates from the soul’s fundamental desire to be completely known by God and neighbor, which has become twisted by the unnatural passions and bears grotesque fruit in the lusts of the flesh.

In Genesis 2:25—3:11, we see that Adam and Eve “were both naked . . . and they were not ashamed.” And then immediately after the serpent’s temptation and their disobedience, Adam says, “I was afraid, because I was naked; and I hid myself.”

This “nakedness” refers both to the physical body and to spiritual intimacy. We are “all naked and open in His sight” (Hebrews 4:13). But because of the Fall and ensuing sins, to be naked both physically and spiritually requires a terrifying degree of vulnerability. Perverted by the Fall, nakedness is something we both desire and fear.

Like Adam and Eve, we fear being absolutely and completely known because we are aware of our imperfection, our spiritual and physical perversions, our estrangement from God and neighbor. Yet we long to be restored and to be known completely.

The unnatural passions and the sins they give birth to suggest that we should overcome this fear of being known by hardening our hearts. In the world around us, both physical and spiritual (psychological) nakedness are achieved with a crude and unnatural boldness. All around us we see people revealing their bodies and hearts by rendering rude and public things that should be private and tender. From the Hollywood/TV reduction of marital intimacy to nothing more than a marketing tool for pornography, to talk shows wherein couples and families publicly air their great brokenness, we see that everyone so badly wants to be known and known completely. Yet hardness of heart and crude “honesty” are not the answer.

Enter St. Mary of Egypt. Naked and known, and an example to all of us, she restored in herself the physical and spiritual nakedness that Adam and Eve had before the Fall. At first, she too sought to be known by hardness of heart and public displays of private matters. At Matins on Sunday morning we will sing, “With the baited hook of the flesh and through the lust of the eyes you took many men prisoner, and by means of short-lived sensual pleasure you made them food for the devil.”

But this brought no peace to her soul, which longed for true intimacy with God and man. And by the grace of God she discovered the one thing that calms the chaos of sensuality and restores physical and spiritual nakedness to its proper place: abstinence.

Deep inside we all want to be known and we all want to be healed; we all want to be “naked and unashamed.” Keep the commandments of Christ! Not because breaking them is simply wrong, but because in keeping them, we find that every core desire in our being is sanctified and fulfilled beyond our imagination, in a fullness that is only imitated and perverted by the lusts of the flesh.

Source: The Grapevine: A Newsletter of St. Lawrence Orthodox Church