Source: DECR
Natalya Mihailova | 20 July 2017
On 18 July 2017, the commemoration day of St. Sergius of Radonezh, the celebrations marking the opening of St. Sergius Metochion, which had been earlier transferred to the Russian Orthodox Church, took place in Jerusalem. 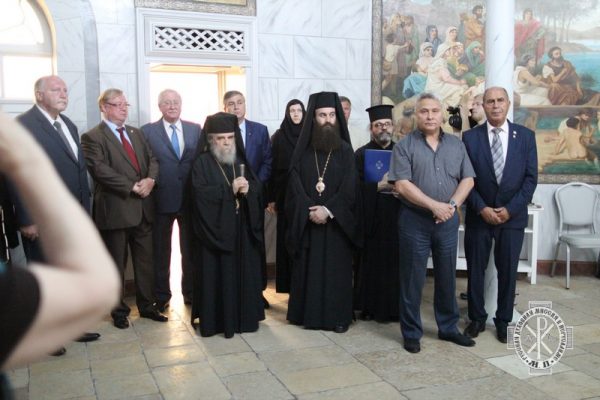 With the blessing of His Holiness Patriarch Kirill of Moscow and All Russia, Bishop Antony of Bogorodsk, head of the Moscow Patriarchate’s Administration for Institutions Abroad, arrived in Jerusalem to take part in the opening ceremony.

Prior to the ceremony, Bishop Antony, in concelebration with the head of the Russian Ecclesiastical Mission, Archimandrite Alexander (Yelisov), performed a rite of consecration of the metochion.

Among those who attended the celebrations were representatives of the Orthodox Church of Jerusalem; the Franciscan Chief Custodian of the Holy Land, Friar Francesco Patton; Mr. Ze’ev Elkin, Minister for Jerusalem Affairs and Heritage of the State of Israel; Mr. Sergei Stepashin, chairman of the Imperial Orthodox Palestine Society; Mr. Alexander Shein, Ambassador Extraordinary and Plenipotentiary of the Russian Federation to the State of Israel; and other statesmen and public figures.

Bishop Antony of Bogorodsk conveyed to the participants in the celebrations greetings from His Holiness Patriarch Kirill of Moscow and All Russia.

“Today the metochion has hospitably opened its doors to numerous guests and pilgrims, and, according to an Orthodox tradition, we have marked a new stage in the history of its activities by a prayer,” Bishop Antony said.

“It is a remarkably beautiful place, which pilgrims from Russia would visit as far back as the 19th century,” Mr. Stepashin said in his speech, noting that St. Sergius Metochion will serve the same purpose as in the 19th and early 20th centuries. “There will be a museum here, an excellent library, a Sunday school. The Russian Ecclesiastical Mission has proposed to organize an interesting exhibition,” he added.

Among those who spoke at the ceremony was also Mr. Ze’ev Elkin, Minister for Jerusalem Affairs and Heritage of the State of Israel. He emphasized that the transfer of the metochion to the Russian Federation and the Russian Orthodox Church was yet another sign of the special, trust-based relationships between Russia and Israel today, between the leaders of the two countries.

St. Sergius Metochion was built at the end of the 19th century for the Russian pilgrims. The funds were provided by the Grand Duke Sergei Alexandrovich Romanov and the Imperial Orthodox Palestine Society.