Source: OCA
Natalya Mihailova | 09 July 2015
His Beatitude, Patriarch John X of Antioch and All the East, will be visiting St. Vladimir’s Orthodox Theological Seminary on Monday, July 27, 2015, to receive an honorary doctoral degree conferred by the seminary Board of Trustees and Faculty Council. 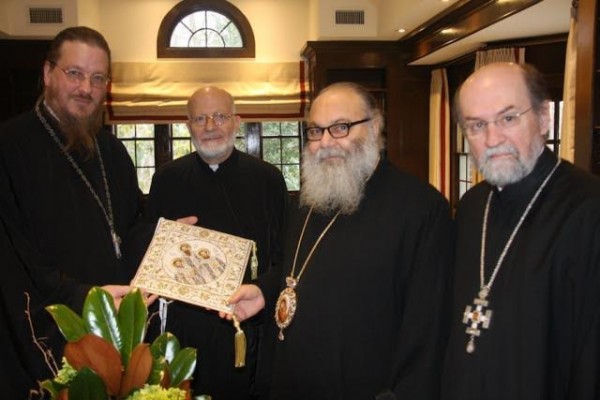 “As Executive Chair of the Board of Trustees of Saint Vladimir’s Seminary,” said Alex Machaskee, “I am extremely pleased that we are conferring an honorary doctorate on His Beatitude John X, patriarch of Antioch and All the East.”

Seminary Dean, Archpriest Dr. John Behr, added that “it is our joy to welcome Patriarch John to our campus, and it is our honor that he is willing to accept a Doctor of Divinity honoris causa from our school.”  Father John also mentioned that His Beatitude is known to him through a personal connection: he is a fellow monk at the Monastery of St. Paul on Mount Athos (Agiou Pavlou), the same monastic community at which Father John’s brother, Father Evdokimos, resides.

The academic convocation will mark the second time within one year that Patriarch John has greeted the Dean and the seminary Chancellor/CEO, Archpriest Dr. Chad Hatfield. In December 2014, the seminary administrators jointly presented a gift of $8,000.00 to Patriarch John to aid suffering Orthodox Christians in the Middle East. The gift represented a tithe of the total $80,000.00 donated to the seminary during its highly successful #GivingTuesday campaign, also conducted in December.

A biography of Patriarch John may be found here.