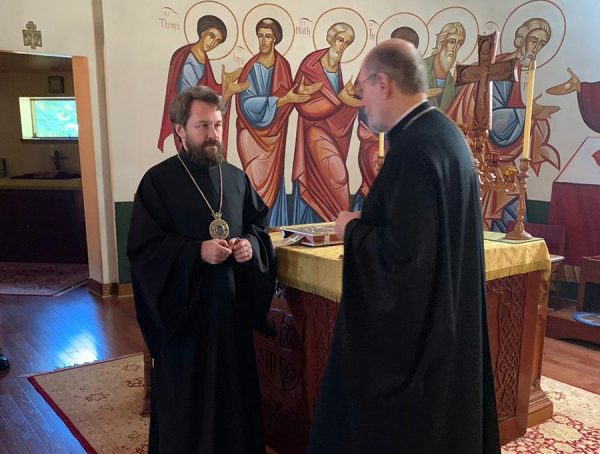 On October 21, 2019, in the course of his visit to the USA, Metropolitan Hilarion of Volokolamsk, head of the Moscow Patriarchate department for external church relations (DECR) and rector of Ss Cyril and Methodius Institute of Post-Graduate Studies (CMI), visited St. Vladimir’s Seminary in New York, the higher education institution of the Orthodox Church in America.

Accompanied by the president of the seminary, Archpriest Chad Hatfield, Metropolitan Hilarion venerated the shrines of the seminary’s Chapel of the Three Hierarchs. After that he had a meeting with the president, officials and staff of the seminary and the SVS Press. Taking part in the meeting were also the seminary’s academic dean Dr. Ionut Alexandru Tudorie, SVS senior adviser Theodore Bazil, academic & recruitment advisor Alexandru M Popovici, chief financial officer Ms Melanie Ringa, marketing director for SVS Press Ms. Sarah Werner, and director of institutional advancement Ms. Macrina Ross.

For the last decades, the SVS press has published Metropolitan Hilarion’s sixteen works in over 20 thousand copies, including The Beginning of the Gospel, which has become a bestseller, from the 6-volume series Jesus Christ: His Life and Teaching. At present, the translation of the second volume of the series The Sermon on the Mount has been nearly completed. It is planned to publish it in the beginning of 2020.

His Eminence presented his 5-volume series Orthodox Christianity. He spoke about the concept of this book series and briefly touched upon the main themes expounded in each volume: the history and canonical order of the Orthodox Church, dogmata and doctrine, church art, devotion and liturgical life, Sacraments and rites. He also presented the first volume of his series about the life and teaching of the Saviour and recounted the themes of the rest volumes intended for the English-speaking reader.

On behalf of the seminary faculty and students as well the SVS Press officials, Father Chad cordially thanked Metropolitan Hilarion for the interesting talk and presented him with the original of a letter written by Alexander Grechaninov, an outstanding church composer of the 20th century (d. 1956), who spent his last days of life and creative work in New York.

After the presentation, Metropolitan Hilarion signed his books at participants’ request and answered questions from profe and students.