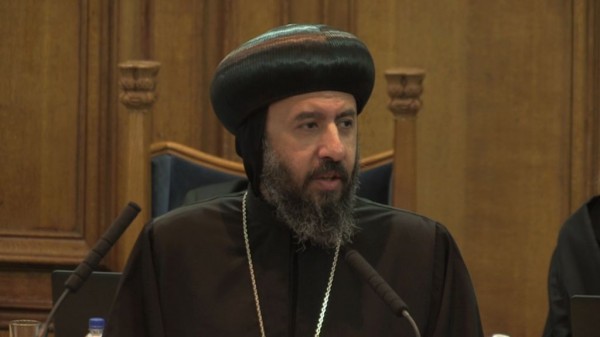 The confirmation of the murder of Ethiopian Christians by Daesh (IS) in Libya has been received with deep sadness. These executions that unnecessarily and unjustifiably claim the lives of innocent people, wholly undeserving of this brutality, have unfortunately become far too familiar. Once again we see innocent Christians murdered purely for refusing to renounce their Faith.

The Christians of Egypt and Ethiopia have had a shared heritage for centuries. Being predominantly Orthodox Christian communities with a mutual understanding of life and witness, and a common origin in the Coptic Orthodox Church, they now also share an even greater connection through the blood of these contemporary martyrs.

This sad news came on the day that His Grace the Archbishop of Canterbury visited His Holiness Pope Tawadros II in Egypt to personally express his condolences following the similar brutal murder of 21 Coptic Orthodox Christians in Libya by Daesh in February of this year.

These horrific murders have not only touched the lives of those in the Middle East and Africa, but have led to a greater sense of solidarity among people and communities around the world.

I am thankful, in the midst of this pain, that the ghastly nature of these crimes is bringing a greater rejection of them, and of any ideology that sanctions, justifies or glorifies brutality and murder.

As people of faith and none who respect humanity and life, we must continue to speak out against such appalling and senseless violence. As Christians, we remain committed to our initial instinct following the murder of our 21 Coptic brothers in Libya, that it is not only for our own good, but indeed our duty to ourselves, the world, and even those who see themselves as our enemies, to forgive and pray for the perpetrators of this and similar crimes. We pray for these men and women, self-confessed religious people, that they may be reminded of the sacred and precious nature of every life created by God.

Acts such as these do not only cause insurmountable pain to so many around the world, especially the families and communities of the victims, but can also create an even greater desensitisation in those perpetrating them to the suffering and pain which they cause.

The will of God, Who created us in His own Image and likeness, can most certainly not be that we feel each other’s pain less or become desensitised to each other’s suffering.

We pray repose for the souls of these innocent men, a change of heart for those who took their lives, but above all we pray comfort and strength for their families and communities, and the many around the world who may not have known them, yet are left to mourn such a tragic and unnecessary loss of precious life.

Having seen the courageous response of the families of the Coptic martyrs in Libya, we pray similar strength, courage and peace for all those suffering as a result of this brutal act, reassured that their loved ones will never be forgotten, having died as true martyrs and paying the ultimate price, hearing the joyful promise “Well done, good and faithful servant…enter into the joy of your Lord.

The widespread brutality facing Christians and minorities in the Middle East is intensifying, and gross violations of the…