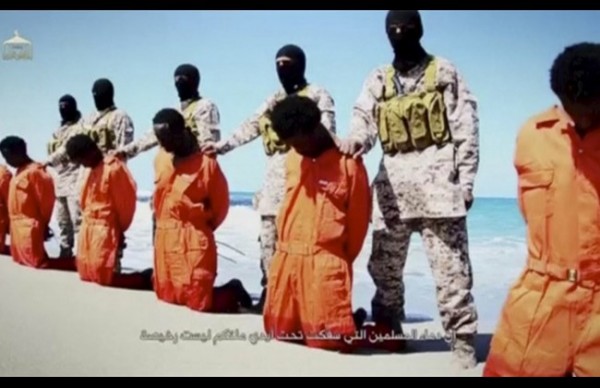 A video shared on social media Sunday April 19, 2015 shows ISIS militants allegedly standing behind around 30 Ethiopian Christians along a beach in Wilayat Barqa in Libya, moments before shooting and beheading them. (REUTERS/Social Media Website)

“The Foreign Ministry condemns, in the strongest terms, terrorist organization ISIS’s slaughter and killing in cold blood of 28 innocentChristian Ethiopians in Libya, whose only sin was to not believe in ISIS’s takfiri ideas and delusional teachings,” the ministry said in a statement Monday.

The ministry offered its condolences to the Ethiopian people and government, expressing solidarity in light of “this painful tragedy.”

“This cowardly act is the best proof that there is no limit to the cruelty and brutality of ISIS, which has become rampant in more than one area, threatening international peace and security,” the statement said.

It called for a unification of international efforts “on all levels” to confront ISIS and its “false ideas.”

A video released by ISIS Sunday appeared to show the killing of two different groups of captured Ethiopian Christians by the extremist group’s Libyan affiliates.

The 29-minute online video purports to show militants holding two groups of captives. It says one group is held by an ISIS affiliate in eastern Libya known as Barka Province and the other by an affiliate in the south calling itself the Fazzan Province.