Ethiopian Christians killed by IS remembered in prayers in Geneva 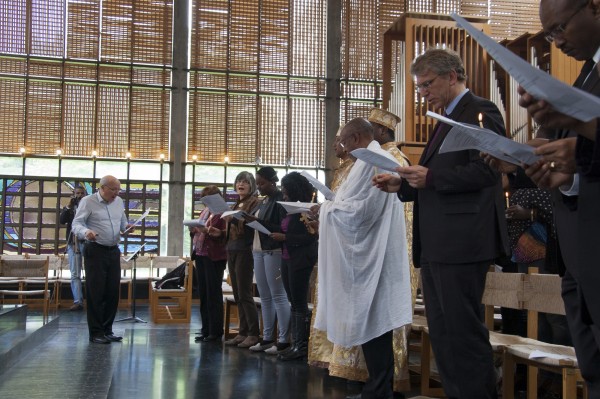 The event was attended by the WCC general secretary Rev. Dr Olav Fykse Tveit and Ambassador Negash Kebret Botora, Permanent Representative of Ethiopia to the United Nations Office at Geneva.

The memorial service on 27 April, conducted by Abba Hailegiorgis, head of the Ethiopian Orthodox Tewahedo Church in Switzerland, gathered dozens of members of Geneva’s Ethiopian community, as well as representatives of international and ecumenical organizations.

The WCC general secretary joined the Ethiopian Orthodox Tewahedo Church in mourning the Ethiopian Christian victims. While condemning the violence, he said such incidents highlight the “urgency for us to commit ourselves in Christian solidarity, as well as in dialogue.”

“Together with Ethiopian churches and people, we mourn the departed. We remember the biblical premise of Matthew 5:4:  ‘Blessed are they that mourn: for they shall be comforted,’” Tveit said.

Ambassador Kebret said, “Ethiopian nation is deeply shocked and horrified to hear the heinous crimes committed against our Ethiopian brothers. The manner in which they were massacred vividly demonstrates the common danger that humanity currently faces from cruel acts of violence.”

He said such incidents still cannot dent the “deep spiritual connections happily existing among Ethiopians – including Christians, Muslims and followers of other faiths – that have been the landmark of their proud tradition of living peacefully in the spirit of compassion, love and brotherhood.”

The memorial service was also an opportunity to pray for the 21 Coptic Egyptians who perished in similar circumstances on 16 February, those caught in perilous circumstances in exile, people killed during the xenophobic attacks in South Africa, as well as those who recently perished in great numbers in the Mediterranean sea. Prayers were also offered for victims of earthquake in Nepal.