Source: Al Jazeera
Natalya Mihailova | 22 April 2015
Ethiopia has begun three days of mourning, with joint Christian and Muslim prayers, for around 30 Ethiopian Christians believed to have been killed by the Islamic State of Iraq and the Levant (ISIL) in Libya. 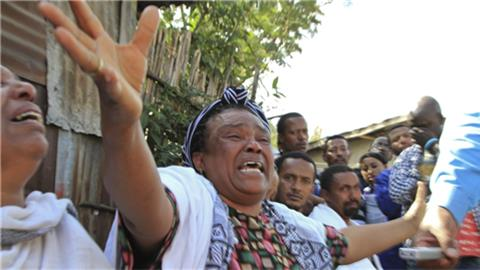 The apparent murders, shown in footage released by ISIL on Sunday, have horrified Ethiopians and sparked global condemnation, including from Pope Francis who expressed his “great distress and sadness”.

“They are animals, they are outside of all humanity,” said Tesfaye Wolde, who saw his only brother Balcha Belete executed in a video released by ISIL.

“I saw him kneeling, a masked man pointing a gun to my brother and his friend, with a knife to their throats.”

“We have a duty to raise our voice to tell the world that the killing of the innocent like animals is completely unacceptable,” he said.

Joint prayers were held along with Muslim leaders, led by Sheikh Mohammed Jemal, head of Ethiopia’s Islamic Affairs Supreme Council, who said the killing of people like “chickens” had no place in Islam.

The ISIL video showed rebels in Libya holding captives who they described as “followers of the cross from the enemy Ethiopian Church”.

A masked fighter in black brandishing a pistol makes a statement threatening Christians if they do not convert to Islam.

The video shows one group of about 12 men being beheaded on a beach and another group of at least 16 being shot in the head in a desert area.

“If ISIL were religious, they would never have killed human beings,” said Kedir Hussein, a Muslim who attended the joint prayers. “The death of these young people is like someone was killed in my family.”

Some of the victims had travelled to Libya in the hope of getting a boat to Europe to start a new life.

Hundreds of Ethiopians marched through the capital on Tuesday, demanding justice for those killed.