Source: Antiochian Orthodox Christian Archdiocese of North America
The Synod Fathers also deplored the silence of the world on the terrorism that affects the Syrian people and disfigures the dignity of the human person, whether by kidnappings, various tortures and forced population displacement.
Natalya Mihailova | 12 July 2014
The following official translation has been provided by the Patriarchate of Antioch: 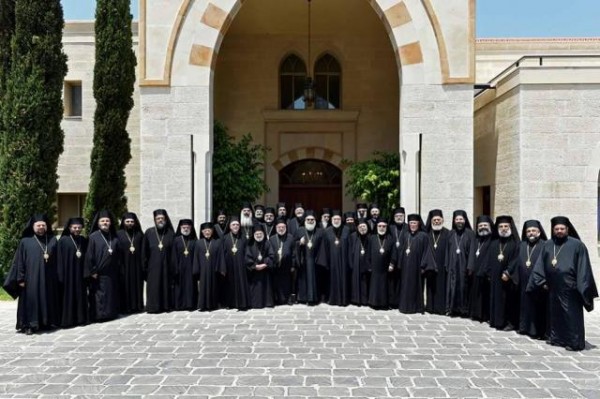 In the opening session of the Holy Synod of Antioch, the Synod Fathers welcomed with great joy Their Beatitudes the Antiochian Patriarchs: Mar Bechara Botros Al-Rai, Ignatius Ephrem II Karim, Gregorios III Laham, and Ignace Youssef III Younan, along with their accompanying bishops. The prelates discussed together ways to allow them to discover the depths of their unity in Christ, and to strengthen the witness of the Christian presence in the Antiochian scope. This witness is based on the evangelical spirit, and is subject to the requirements of human relationships based on selfless love. This common endeavor seeks to preserve the well-being of the suffering Middle Easterners and their prosperity. Thus, they decided to create a joint commission for the purpose of stimulating dialogue and cooperation between the Antiochian churches and preparing a joint action plan. This plan will be presented to the churches in order to discuss its implementation in the Antiochian scope.

The Synod Fathers reviewed the recommendations presented by the General Antiochian Conference held in Balamand between 25 and 29 June 2014. They offered thanks to the Lord God for the success of this Conference during which the faithful were given the opportunity to discuss several issues with their spiritual fathers and hear what the Spirit is saying to the Churches in a filial spirit of love, and in an atmosphere of openness and affability. The Synod Fathers commended the spiritual vigilance of the faithful, their commitment to their Church matters, and their labor in the field of the Lord in a cooperative spirit of love. The Synod members decided to form a synodal commission in order to study these recommendations and submit the results to the Holy Synod.

The Synod Fathers were informed of the decision of His Eminence Metropolitan Constantine (Papastephano), Metropolitan of Baghdad, Kuwait, the Arabian Peninsula and dependencies, to resign from leading his Archdiocese. The Fathers accepted his resignation, and thanked His Eminence for all his efforts and services for the Archdiocese. They prayed to the Lord God to strengthen him and give him many blessings in his old age. Furthermore, His Beatitude gave the Synod Fathers a detailed presentation on the visit he made to this Archdiocese during which he met the faithful in the Kingdom of Bahrain and in the United Arab Emirates. In this visit, His Beatitude had the opportunity to see their pastoral needs and was able to meet with the leaders of their parishes. The faithful have shown all readiness to stimulate and strengthen the Antiochian Orthodox presence in these countries. In this context, the Synod Fathers decided to review the geographical composition of the Archdiocese which was reconstituted as follows:
1. The Archdiocese of Baghdad, Kuwait and dependencies, covering Iraq, Kuwait, Saudi Arabia, Yemen and Oman;
2. The Patriarchal Vicariate of the Kingdom of Bahrain;
3. The Patriarchal Vicariate of the Emirate of Qatar;
4. The Patriarchal Vicariate of the United Arab Emirates.

Similarly, the Synod Fathers listened to a detailed presentation given by His Beatitude about his recent irenic visit to the Russian Orthodox Church, and the visit’s main ecclesiastical and civil aspects.

The members of the Holy Synod also discussed the situation in the Archdiocese of New York and All North America whose metropolitan seat has been vacant, since the repose of His Eminence Metropolitan Philip (Saliba) of Thrice Blessed Memory. Subsequently, they elected in an extraordinary session His Eminence Joseph (Zehlawi) as Metropolitan of New York and all North America. The fathers sent their best greetings to all their faithful in this Archdiocese, congratulating them for the election of their new Archpastor. They also conveyed their best wishes to the new Metropolitan, praying to the Lord God to bless His service at the Divine Altar of the Lord.

In recognition of Archbishop Niphon (Saykali)’s pastoral labor, and in tribute to his role in the expansion of ties with the Russian Orthodox Church and in consolidating the Antiochian presence in the Russian scope, the synod decided to dignify him by granting him the honorary title of “Metropolitan of Chehba (Philipopolis).”

The Synod Fathers contemplated the pain and sufferings of the Syrian people. They heard a report of the visit of His Beatitude to the city Maaloula, and then to the ruined Archdiocese of Homs. They were informed of the charitable and relief work being led and conducted by the Orthodox Church in Syria. Given the magnitude of the circumstances that struck the people and their Church, and the tragedy and damage that have befell both the human and the stone, sparing neither monasteries nor places of worship, the Synod Fathers have beseeched their faithful to remain attached to their land and not to abandon it. They asked them to remain steadfast, since their presence in this land is a witness of Christ’s conquering death and His Holy Resurrection. They admonished them to turn to God, and not be in despair, because God is with us like dew in the middle of flames. In these difficult times, God cures our many injuries, and soothes our great pain.

The Synod Fathers also deplored the silence of the world on the terrorism that affects the Syrian people and disfigures the dignity of the human person, whether by kidnappings, various tortures and forced population displacement. They called on the international community and the living human consciousness to stop acting as just spectators of these afflictions, inviting them to take the initiative to work seriously for ending the crisis and allowing the return of refugees to their homes and villages, and the freedom of all abducted people: the nuns and priests, as well as the two metropolitans of Aleppo, John (Ibrahim) and Paul (Yazigi) that have been kidnapped since more than 14 months. Their abduction is in itself a precedent that has no equivalent in the history of this East. It has ravaged human rights and the rights of groups, amid a global and regional indifference.

Lebanon was also present in the discussions of Synod members. They called on all parties concerned to speed up and fill the constitutional vacuum which occurred in the Presidency of the Republic. The quick election of a president avoids Lebanon the dangers which threaten it in the midst of regional changes underway in the Middle East, impacting Lebanon as well. They have called on leaders to jump over their factional disputes and narrow paths policies in order to work in loyalty for the development of their people and its prosperity. They confirmed the need to fight criminal acts and terrorists.

The Synod Fathers also prayed for the country of Iraq which is also in crisis. They have invited the world to turn its attention to the sufferings of the people who endured the plagues of war for decades now. They called men of good will to work for the unity of this country, the development of its citizens, and for the preservation of the Christian presence in it.

The Synod Fathers also turned to the resisting Palestine whose children continue to be brought every day to the slaughter, while the world hardened its heart and blocked its ears and closed its eyes in order not to see, or hear, or understand the continuous tragedy of the Palestinian people who is killed, removed from their houses, and forcibly displaced and desecrated. The Synod Fathers ask the world to work seriously and quickly to find a quick and fair solution to this issue which remains a bleeding wound in humanity.

The Fathers also congratulated their Muslim brothers in the occasion of the holy month of Ramadan, asking God to send down His peace upon them and their countries, so that they can overcome this terrible time. They reaffirmed the importance of strengthening the bond that unites us all, in order to work against the dangers that are befalling us, and to rebuild our countries, physically and humanly, on the basis of Divine values.

In conclusion, the members of the Holy Synod expressed their joy in seeing the Christian witness given by the faithful throughout the Antiochian scope, especially in the Archdioceses of Europe, Australia and the Americas. The Fathers wish to remind them that they are called to be “the salt of the earth and the leaven that leavens all the bread.” This is achieved through their involvement in the civic work of their homelands, working in the service of all humans beyond race or religious affiliation, through formulating policies which go beyond the present conditions, incarnating the Lord’s sovereignty in thought and life.