Source: OCA
Natalya Mihailova | 24 June 2016
The following statement was approved by the Holy Synod of Bishops of the Orthodox Church in America during a session of the Holy Synod on June 16, 2016 at Dormition of the Mother of God Monastery in Rives Junction, MI. It is approved for posting and use by all dioceses, parishes, institutions and monasteries of the Orthodox Church in America. 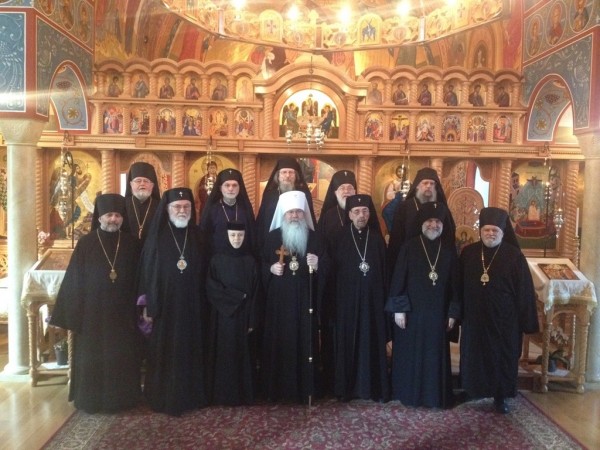 The Orthodox Church in America teaches and maintains as a sincerely held religious belief that God has established marriage as a lifelong, exclusive relationship between one man and one woman, and that all intimate sexual activity outside the marriage relationship, whether heterosexual, homosexual, or otherwise, is immoral, and therefore sin (Genesis 2:24-25; Exodus 20:14, 17, 22:19; Leviticus 18:22-23, 20:13, 15-16; Matthew 19:4-6, 9; Romans 1:18-31; I Corinthians 6:9-10, 15-20; I Timothy 1:8-11; Jude 7). This principle undergirds the teaching of the Holy Synod of the Orthodox Church in America that Marriage is the most perfect realization of love between a man and a woman in which two become one and in which love unites in such a way that two lives become one life in perfect harmony. We believe that God created the human race male and female and that all conduct with the intent to adopt a gender other than one’s birth gender is immoral and therefore sin (Genesis 1:27; Deuteronomy 22:5).  Marriage can only be between two people whose birth sex is male and female. The Orthodox Church’s marriage service specifically states, “Establish them in the holy union which is from Thee. For in the beginning Thou didst make them male and female, and by Thee the woman is joined unto the man as a helper and for the procreation of the human race.” Again the service states explicitly, “For by Thee is the husband joined unto the wife. Unite them in one mind; wed them into one flesh, granting to them of the fruit of the body, and the procreation of fair children.”

The Holy Synod of the Orthodox Church in America upholds and reaffirms such statements such as the July 2, 2013 Synodal Affirmation of Marriage; the July, 1992 Synodal Affirmations on Marriage, Family Life, Sexuality, and the Sanctity of Life; and other such statements and pastoral letters including the June 28, 2015 Statement on US Supreme Court Decision by His Beatitude Metropolitan Tikhon.