Source: OCA
Natalya Mihailova | 01 February 2018
Tens of thousands of pro-life marchers from across the United States gathered in the nation’s capital on Friday, January 19, 2018 for the 45th annual March for Life. 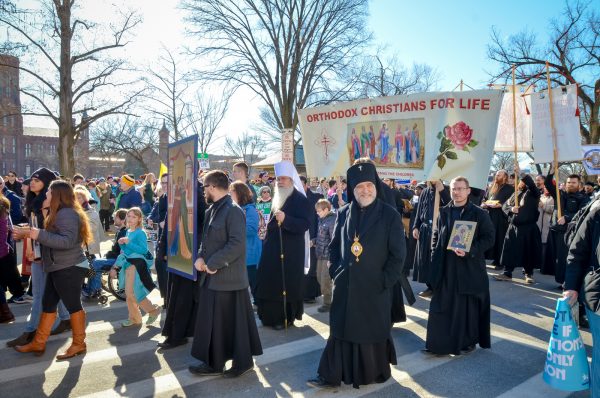 The annual March marks the anniversary of the January 22, 1973 Roe v. Wade decision that legalized abortion in the United States.  The theme of this year’s March was “Love Saves Lives.”

As reported earlier, His Beatitude, Metropolitan Tikhon, led the Orthodox Christian hierarchs, clergy, seminarians and faithful at the March.  Other participating hierarchs included His Eminence, Archbishop Melchisedek of Pittsburgh and His Eminence, Archbishop Michael of New York.  In addition to representing the Holy Synod of Bishops of the Orthodox Church in America, Metropolitan Tikhon represented the Assembly of Canonical Orthodox Bishops of the United States of America at the request of His Eminence, Archbishop Demetrios of the Greek Orthodox Archdiocese of America, who chairs the Assembly.  Also present were numerous hierarchs and representatives of the Oriental Churches and other traditions.

On the eve of the March, Metropolitan Tikhon was among those who attended a Prayer Vigil at the Basilica of the National Shrine of the Immaculate Conception, Washington DC.  Presiding at the Vigil, which was organized by United States Conference of Catholic Bishops, was His Eminence, Timothy Cardinal Dolan of New York, who together with other Roman Catholic hierarchs extended a warm welcome to Metropolitan Tikhon and those accompanying him.

“As life is one, all violence of any kind is of the same essence, the tearing of the one tunic,” Metropolitan Tikhon prayed.  “The tearing of the tunic will take many forms, abortion, execution, war, racism, genocide, oppression, slavery, hatred of any kind, but the essence of all is one and the same.  All such acts are only symptoms of one and the same illness, ‘the sin of the world,’ of which we are all part, which is self-love.”

The text of Metropoltan Tikhon’s opening prayer appears below.  A related video also is available.

Among those joining Metropolitan Tikhon on the stage were Archbishops Melchisedek and Michael and Timothy Cardinal Dolan.

After offering prayers for the victims of abortion, Metropolitan Tikhon led the Orthodox Christian marchers, which included a strong representation from Saint Tikhon’s Seminary, South Canaan, PA, and Saint Vladimir’s Seminary, Yonkers, NY.  After the March, the seminarians were hosted for dinner by the faithful of the OCA’s Saint Nicholas Cathedral.  Among the marchers was the Roman Catholic Archbishop of Galveston-Houston, His Eminence, Daniel Cardinal DiNardo. 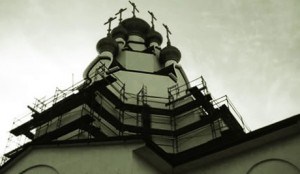 The enthronement of the new primate of the Orthodox Church in America, Metropolitan Tikhon, has taken…

On Monday, July 9, 2012, His Beatitude, Metropolitan Jonah and the members of the Holy Synod…