Sunday of the Paralytic

And finally, there are those who are us, we are spiritually paralyzed – and that describes the majority of us, we who make little or no effort to appeal to the Lord for healing of our spiritual illnesses and ailments. We who make little or no attempt to cooperate with the powerful grace and energy that God sends to us every day and which we turn away from; we who confess our sins and then turn right around and do them all over again, demonstrating our complete lack of repentance and determination to change.
Hieroschemamonk Ambrose (formerly Fr. Alexey) Young | 14 May 2011

In the Name of the Father, the Son and the Holy Spirit. Amen.

Today is called the Sunday of the Paralytic in the Orthodox liturgical calendar. It is so called because of the Gospel appointed to be read today, John 5:1, which recounts the healing by our Lord Jesus Christ of a paralytic at the Sheep Pool, called Bethesda. (You have probably heard of a very famous hospital in Maryland, near Washington D.C., called “Bethesda” – and, if you didn’t know before, now you know that it’s called that because of the Gospel association of Bethesda with healing.) In 1988, Gerondissa and my late wife and two of our children were in Jerusalem and stood right at the side of the ruins of the Pool of Bethesda. It is located in a Muslim quarter of Jerusalem, just behind the beautiful crusader church of St. Anna, which stands next to the site of the house in which the parents of the Theotokos lived, and where the Virgin Mary was also born.

There is a back story here. As you know, in the first century the Romans destroyed Jerusalem and so, until the 19th century, there was no visible, above-ground evidence for this pool. As a result, skeptical biblical scholars decided that both the place and the and the story in the Gospel were fiction; this Gospel, they maintained (without any actual evidence, I may say) was actually written long after St. John’s death and by someone who wasn’t familiar with the layout and geography of Jerusalem in the time of Christ.

But then, however, archaeologists discovered the ruins under much rubble of a holding tank that exactly corresponds to the Pool of Bethesda in St. John’s account! Further digging confirmed this. Of course this didn’t stop the skeptics, who have continued to maintain their impious and even unscientific views of Scripture in general. But the ruins of the pool are there: and it has been verified by scientists to be the real McCoy; you can go there and pray and read the account of the healing of the paralytic on the spot where it happened!

It’s also called the Sheep Pool, by the way, because this was the place where sheep that were to be sacrificed in the nearby Temple were washed and inspected to be sure that they were without blemish.

There were also five porches or porticos around the pool, and in the shelter of these marble porches great numbers of the sick and diseased gathered, waiting for what was called “the troubling of the water.” What was this about, this “troubling of the water”? According to Jewish belief, once a year an angel would descend and stir up the waters, and the first person to get into the water when the angel did this, would be healed.

According to the Orthodox patristic tradition, there is more to this story. Our Holy Fathers teach us that when Adam was expelled from Eden he took with him two seeds from the Tree of Life. One of these seeds he planted in what was much later to become a suburb of Jerusalem. This seed grew into the tree that became the wood of the Cross, and this spot is marked today by an Orthodox monastery dedicated to the Holy Cross. 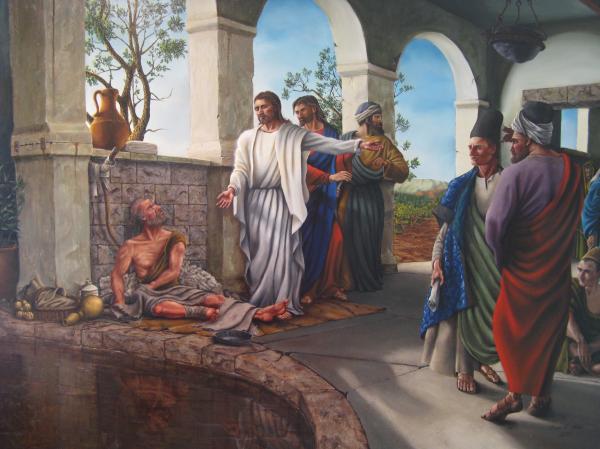 The other seed, however, was dropped accidentally by Adam, and the waters of a spring immediately came to the surface and hid it; in time this became what we call the Pool of Bethesda, or the Sheep Pool. And thus, each year, on the anniversary of Adam’s having dropped this seed there, an angel from heaven descended and stirred the water into a whirlpool, seeking the seed. But of course the action of a holy angel is filled with grace – grace so strong that it could heal someone of even a dire or terminal illness.

This is the “back story” to this Gospel account. (Of course modern bible scholars discount all of this because they discount anything that is miraculous.) And this “back story” has taken up most of my sermon this morning. But there is one other thing I need to point out before concluding, and that is this:

THE LORD’S HEALING OF THE PARALYTIC REMINDS US MOST FORCEFULLY THAT ALL OF US, TO ONE DEGREE OR ANOTHER, AND IN ONE WAY OR ANOTHER, ARE ALSO “PARALYZED” – NOT NECESSARILY PHYSICALLY, BUT SPIRITUALLY, AND SOMETIMES ALSO INTELLECTUALLY AND MENTALY.

Let me explain. People who are not open to knowledge and learning and new ideas are intellectually paralyzed and, I’m afraid, this describes the majority of people in our society and culture today, including many of those who attend our very left-leaning and agnostic colleges and universities and are considered “educated”. These are people who have turned their backs on Christ, who is “the Way, the Truth, and the Life,” and they have closed their minds to the miraculous and the Church which was established upon the faith of St. Peter and the other Apostles. And then there are those who are mental paralyzed – those suffering from mental illnesses and from advanced forms of dementia.

And finally, there are those who are us, we are spiritually paralyzed – and that describes the majority of us, we who make little or no effort to appeal to the Lord for healing of our spiritual illnesses and ailments. We who make little or no attempt to cooperate with the powerful grace and energy that God sends to us every day and which we turn away from; we who confess our sins and then turn right around and do them all over again, demonstrating our complete lack of repentance and determination to change.

WE SEEM TO HAVE FORGOTTEN, OR DON’t BELIEVE, THAT THE LORD IS SOVEREIGN OVER ANY AND ALL DIFFICULTIES AND ILLNESSES. AND THIS GOSPEL ACCOUNT SHOWS THAT HE IS ALOS SOVEREIGN OVER SINS.

Remember, in this particular healing, Christ says that the man’s paralysis is the result of his sins and that if he continues to sin, an even worse malady will come upon him. Now, not all physical illness is the result of sin, but this Gospel lets us know that some illness is!

However, brothers and sisters, we can know for sure that all spiritual illness is the result of sin. Sins that we repeatedly commit; sins with which we do even struggle; sins that we do not seek the Lord’s strength to deal with; sins that we justify to ourselves and others – all of these plant a seed of spiritual disease that grows and increases all through our lives, becoming stronger and stronger, greater and greater in their size and ability to corrupt us…unless, that is, we finally humble down and seek the Lord’s healing.

Of course, we can receive healing and grace and strength through the traditional channels of grace, which are the sacraments or Holy Mysteries of the Church – in particular worthily-received Holy Communion and sincere and frequent Confession. But we must never overlook the fact that our Lord can and often acts directly on the human soul. This direct contact between the Lord Jesus Christ and a troubled soul is often overlooked, underestimated, or ignored. But this contact, this healing, comes specifically through an active and mature prayer life and through a broken heart, a heart that realizes, finally, that it can do nothing for itself without Christ, as the Psalm says, “a broken and a contrite heart, God will not despise.”

Sunday of the Paralytic by Archimandrite Tikhon (Shevkunov)
Do you want to be made well by Fr. Sergei Sveshnikov