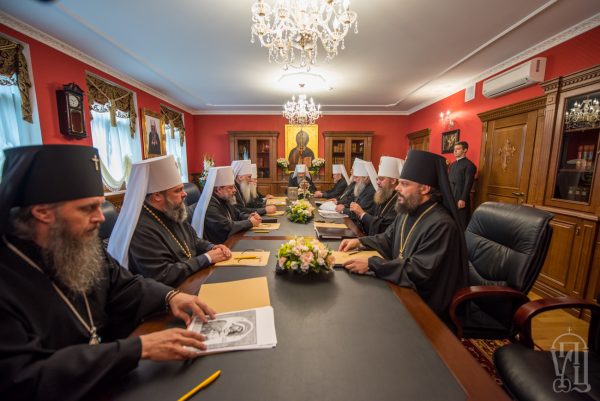 The Holy Synod of the Ukrainian Orthodox Church (UOC) held a meeting yesterday at the Kiev Caves Lavra at which it officially expressed its attitude to the Patriarchate of Constantinople’s appoints of two exarch bishops in Kiev to meet with Ukrainian schismatics.

“The ‘exarchs’ of the Patriarchate of Constantinople, Archbishop Daniel of Pamphilon and Bishop Ilarion of Edmonton, must leave the canonical territory of the Ukrainian Orthodox Church,” the Synod’s resolution states, noting that their activities are anti-canonical and violate inter-confessional peace in Ukraine.

The appointment of the exarchs was announced on September 7. His Beatitude Metropolitan Onuphry of Kiev and All Ukraine, the primate of the UOC, then stated in an interview that Constantinople has no such rights, and he also announced that UOC representatives would not meet with the Constantinople exarchs.

The members of the Holy Synod also called upon the clergy, monastics, and faithful of the UOC to strengthen their prayers for the preservation of the unity of holy Orthodoxy.