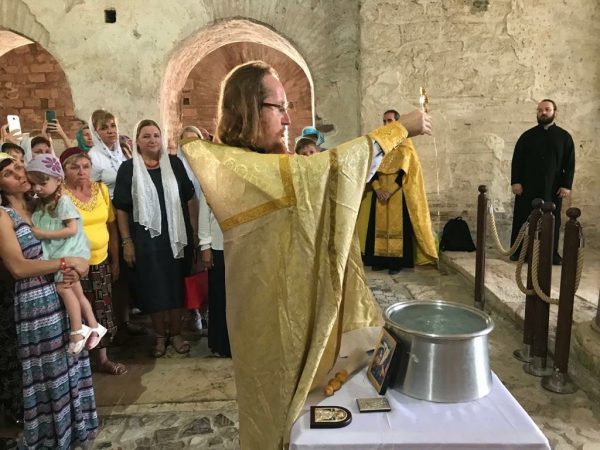 From August 10-14, 2019, the Moscow Patriarchate Pilgrimage Center held the 2nd St. Nicholas Pilgrims Assembly in Demre, Turkey. It was conducted together with the Russian Art and Culture Society in Antalya and with the support of the Turkish Ministry of Culture and Tourism, the Demre city council and the Tour Operators and Hoteliers Society in Antalya. The assembly was timed for the birthday of St. Nicholas, Bishop of Myra in Lycia and Wonderworker. The aim of the event was to revive the tradition of celebrating the saint’s birthday, which had been marked in the Russian Orthodox Church’s calendar until the mid-18th century.

On August 10, for the first time in over a century, All-Night Vigil was celebrated in the St. Nicholas church in Demre. With a blessing of His Holiness Patriarch Kirill of Moscow and All Russia, the service was led by Father George Sergeyev, who is responsible for organizing pastoral care for Russian-speaking believers in Turkey.

On August 11, St. Nicholas’s birthday, the Divine Liturgy was celebrated in Demre, during which petitions for the unity of the Orthodox Church and safeguarding the Church against divisions and schisms, as well as a prayer for peace in Ukraine and good-neighbourly relations between Russia and Turkey were lifted up.

Present at the liturgy were A. Adrianov of the Russian general consulate in Antalya, and Ms. M. Karlova, a widow of the Russian ambassador assassinated in Turkey and president of the Andrey Karlov Foundation. Among the worshippers there were numerous pilgrims and many of them partook of the Holy Gifts of Christ.

After the liturgy, the blessing of water was held.

The participants in the service said the prayer for the dead and laid flowers at the monument to Andrey Karlov, a Russia’s Hero, who was killed by a terrorist on December 19, 2016, in Ankara. Demre is a twin-town of Andrey Karlov’s home town of Klintsov; Demre’s main street is named after the late Russian ambassador in Turkey.

The pilgrims visited churches and cities in the old land of Lycia associated with the ministry of St. Nicholas the Wonderworker, St. Methodius of Patara and St. Nicholas of Pinara. It was agreed to chart a pilgrimage itinerary. Demre mayor Murat Uz, speaking on behalf of the Turkish state, offered comprehensive support to the pilgrimage movement with assistance from the Russian Art and Culture Society and approved of the initiative of the Moscow Patriarchate Pilgrimage
Center to get pilgrims to come to old Lycia for many-days journeys around the year, which will help develop the region.