Source: TASS Russian News Agency
Natalya Mihailova | 22 May 2017
MOSCOW, May 22. /TASS/. Veneration of St Nicholas the Wonderworker, a fragment of whose relics was delivered to Russia from Italy on Sunday, unites the Eastern Orthodox and Roman Catholic Christians, the Patriarch of Moscow and all Russia Kirill I said on Sunday as he received a group of clerics of the Roman Catholic Church and officials from the city of Bari, where St Nicholas's relics are kept since the 11th century. 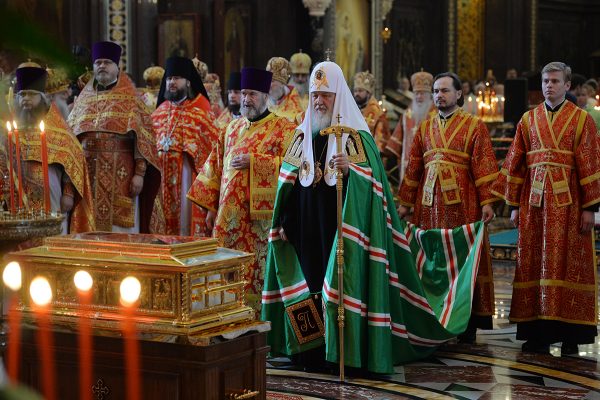 “We’re divided by the calendar reform but still are not divided by the date on which we venerate St Nicholas and the delivery of the relics from Myra in Lycia to Bari,” he said

Kirill I recalled the technological difficulties of the retrieval of the relics from the crypt. In this connection he thanked the Institute of Forensic and Insurance Medicine at Bari University and its Director Francesco Introne. He also thanked the Mayor of Bari, Antonio Decaro, Archbishop Francesco Cacucci of Bari-Bitono, and the pontiffical nuncio in Russia, Archbishop Celestino Migliore.

“I think our common efforts were crowned with tremendous success, as the relics are in Moscow today and tens of thousands of people are queuing up to venerate them,” His Holiness said.

“Spiritual and cultural cooperation is one of the most efficacious intstruments, with the aid of which the Churches can facilitate the elimination of hostility among nations at our difficult times when we see the escalation of conflicts and confrontations in the international arena.

From St Petersburg, the relics will return to Bari.