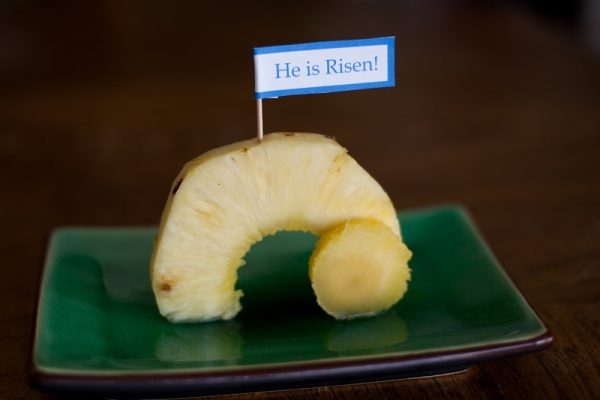 When I think back to Easter as a child, I remember year after year in Sunday School coloring cross pictures, making empty tomb crafts, having Easter-themed snacks, and singing celebratory worship songs. There is no doubt I learned that Jesus was raised from the dead after dying on the cross three days before.

But as an adult, I look back on those experiences and realize how much more today’s kids need to understand about Easter given the world they’re growing up in. We can’t take for granted that knowing what the Bible says about the resurrection is enough for kids to have a confident faith when they’re surrounded by a culture that calls such a belief ridiculous. There’s so much more to learn than what kids are getting from their resurrection crafts.

I could write a lot about this, but I’ll narrow it to the three most important conversations about Easter that Sunday Schools and parents rarely have with kids.

1. Why does it matter if Jesus was resurrected?

When my husband and I were first married, we started attending a nearby Presbyterian church. Neither of us had any idea what to look for when choosing a church, so we went with “close, big, and Christian-sounding” (neither of us grew up Presbyterian but we knew it was a Christian denomination).

We attended that church for three years before we realized something wasn’t quite right. It was Easter Sunday when the pastor informed us, “It doesn’t really matter if Jesus rose from the dead or not. What matters is that he lives on in our hearts and we can now make the world a better place.”

We didn’t know the term for it at the time, but we had been attending a “progressive” Christian church (this is not to say that all Presbyterian churches are progressive in their teaching). I knew the pastor was preaching something unbiblical, but I couldn’t have begun to articulate why—even though I had grown up in a Christian home and had spent hundreds of hours in church.

It’s sad to me in retrospect that the question of why it mattered that Jesus was raised from the dead was not completely clear in my mind by that point. But I think it’s a good example of how explicitly we need to connect the dots for kids. We can’t assume they will automatically deduce why the resurrection matters just because they learn the resurrection happened.

So why does it matter? Let’s start here: Jesus repeatedly predicted his resurrection.

If Jesus predicted his resurrection but did not come back to life, he would either have been mistaken or have been an outright liar. In either case, that would mean he wasn’t perfect and wasn’t God. And if Jesus was not God, he had no power to die on the cross for our sins. Nor would we have any reason to care what he taught—he would have just been another human like us. As the apostle Paul says in 1 Corinthians 15:14, “If Christ has not been raised, our preaching is useless and so is your faith.”

But if he predicted his resurrection and did come back to life, it validated his claims to being God (only God could do that!). That’s an extremely significant point that appears to have been lost in some churches—like the one I attended.

2. Why should we believe a resurrection miracle is possible?

Last Easter, Scientific American magazine featured an article by atheist Michael Shermer entitled, “What Would It Take to Prove the Resurrection?” It was subtitled, “How to think about claims, even the Resurrection.” This article featured extraordinarily bad logic, which I fully outlined in a blog post at the time. It basically boiled down to a popular magazine stating that the way to think about a claim like the resurrection is to:

This is what passes for “scientific” today, and it’s a way of thinking kids will frequently encounter. Shermer and skeptics like him simply presuppose supernatural miracles aren’t possible. But here’s better logic to learn: The possibility of miracles depends on whether or not God exists.

This is simple logic that even young kids can understand (I taught it to my kids in Kindergarten). If someone says miracles aren’t possible, kids should immediately recognize that such a statement assumes God doesn’t exist. Of course, we must then be able to share the evidence for God’s existence, as the logical plausibility of the resurrection rests on it (for help with talking about the evidence for God’s existence with your kids, see chapters 1-6 of Talking with Your Kids about God).

3. Why should we believe a resurrection miracle actually happened?

There’s a big leap from miracles being possible given the evidence for God’s existence and being able to determine that a miracle has actually happened.

In the case of the resurrection, there are four facts that are so strongly attested historically that they are granted by nearly every scholar who studies the subject, including skeptical ones (this is known as the “Minimal Facts” argument). Drs. Gary Habermas and Michael Licona lay these out in their book, The Case for the Resurrection of Jesus. I’ll briefly explain each below. See Habermas and Licona’s book for a comprehensive discussion, or chapter 21 in Keeping Your Kids on God’s Side for a more detailed summary.

Again, these are the facts that the vast majority of scholars agree on…facts which require explanation. In chapter 22 of Keeping Your Kids on God’s Side, I explain the competing naturalistic (i.e., non-resurrection) explanations scholars have offered, and show how none of them adequately account for these facts. Unless you presuppose that miracles don’t happen (which takes us back to point 2), the best explanation for the historical facts is that Jesus actually rose from the dead.

I realize that Sunday Schools have to cover basics for the ongoing group of kids who are new to Christianity. But if the church doesn’t step up to equip kids with the next level of understanding in their faith, we will undoubtedly continue to see a youth exodus from Christianity. That said, while I wish more churches were stepping up to teach subjects like these, ultimately it’s the parents’ responsibility to disciple their kids. This Easter, throw out these three questions to your kids and start some conversations that will be more impactful than empty tomb crafts can ever be.