The Collapse into Chaos – Where Only God Makes Sense 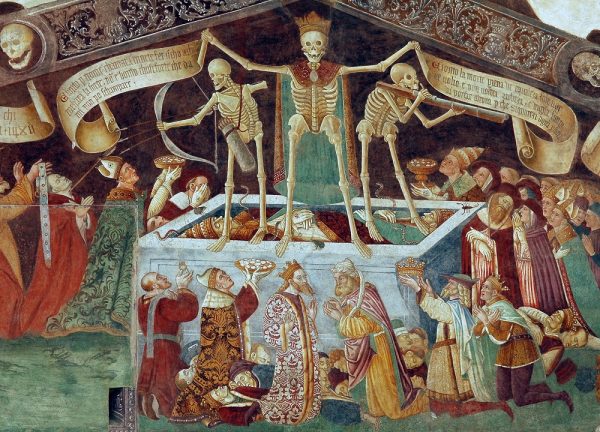 Nothing is more traumatic than the onset of chaos. Predictability breaks down, goodness seems to disappear, and the madness of sheer survival takes over. In chaos, everything seems plausible since reason itself has become unreachable.

A recent spate of reading took me down the rabbit hole into the madness of the 14th century. For all of the “structure” and stability of the Middle Ages, a society where everyone seemed to have a place and all of the places were arranged into a meaningful pattern, brutality and greed often bared their teeth with a rapacious grin. Wars and violence were common, as were famines and worse. The Catholic Church of that time (for all of the pageantry and beauty of its buildings) was frequently governed by a corruption that would make our modern scandals seem but a minor thing.

The early part of the century saw the strange phenomenon of the “Avignon Papacy,” where, under the domination of the French kings, the papacy was moved from Rome to Avignon, France. It was only one symptom of the turmoil and struggle that marked Church-State relations. Into the middle of a messy century, the Black Death struck, killing anywhere from one-third to one-half of the population of Europe over a period of eight years. To read detailed descriptions of that plague is a fearful gaze into the worst scenarios in human experience. We did not handle it well.

One of the most immediate victims of the plague was the reasonability of the world. The cause of the plague was unknown and unimaginable in a world without knowledge of bacteria and viruses. Everything that comprised the medical knowledge of the time was useless – nothing worked. At the same time, theories of how God managed history and interacted with the world seemed equally useless. Prayers, fasting, repentance, every suggested action left the contagion unfazed. The pious died as horribly as the sinful.

It has been suggested (and not without merit) that the seeds of modernity were sown in the years of the plague and their aftermath. If that is so, then it would be correct to say that among the victims of the Black Death was the so-called “enchantment” of that time. One reason for that early disenchantment was the simple fact that it did not work. Its failure left a fissure between the Medieval Church and the popular imagination. It was an empty space waiting to be filled.

With a distance of of nearly 700 years and a bit of science, it is possible to read about such events and such a chaotic time with both a sense of detachment as well as a sense of understanding. We know what caused the plague (Yersinia pestis), just as we can easily judge the failures of the society of that time. Time and distance create an illusion of omniscience. We bring that illusion into our own experience and expound to one another about the failures of our own age as well as what would count as a solution.

For some, the religious failures of the 14th century serve to bolster a general critique of religious belief itself. One of the blind spots of modernity is to imagine ourselves to be in a non-religious, secularized world. I describe it as a blind spot inasmuch as the modern mind-set is itself thoroughly religious in its make-up. No medieval theologian had a “theory of everything” anywhere as complete as the mind of modernity. The modern world is not “disenchanted” so much as it has a “modern enchantment.” We have faith in market forces, medicine, government, democracy, technology, algorithms, and the march of progress. We think we know the meaning of history. The human mind is not compatible with “disenchantment.” It is, and always has been, an enchanted space.

I have seen a microcosm of the 14th century. It happens all the time. However, in our days, it happens in an isolated family or community. Everything seems to going smoothly until it doesn’t. The loss of a job, the closing of a factory, the onset of disease in a family, an unexpected accident, and similar events, sometimes seem to cascade in the life of a family or a community, leaving its members in stunned silence and the chaos of meaninglessness. I have sat with such families as a pastor or counselor. There are no words to be spoken that will fill the emptiness that has become their world. You can pray, but the words are carefully chosen, dancing around the yawning maw of banality that threatens to swallow prayer itself.

It seems to me that God is either in the chaos or nowhere. That He seems nowhere for many people suggests to me that our explanations (whether Medieval or Modern) are simply inadequate – our religions are often too little and beside the point. The rationality of our own reasoning becomes a substitute for the rationality of the Logos, the only Reason that matters.

My years as a priest, particularly as they have forced me to sit any number of times in the midst of chaotic moments (including those of my own), have frequently pressed me towards the God-in-the-chaos just as they demolished my many idolatries. The Orthodox faith has championed “apophatic” theology since its earliest centuries. This is the confession that we stand “speechless” (“apo-phatic” = “apart from speech”) before the mystery that confronts us. We can see the beauty and the wonder of the world in which its well-ordering astounds us while just as easily being crushed under the senselessness of senseless evil. We confess that the Word (Logos, Reason, Meaning of All Things) became flesh and dwelt among us, even as we remain speechless about the fullness of what this means. We confess that He “died for our sins” even as we grapple with what that means (and argue endlessly about it).

It seems utterly critical to me that we understand that Christ (the Logos) is Christ Crucified. As St. Paul says, “I determined to know nothing among you except Jesus Christ and Him crucified.” (1 Cor. 2:2) This is not just the Logos, the Lord of order and reason, but the Logos Crucified, the Lord of chaos and unmeaning. We confess that He “tramples down death by death” (smashes chaos by chaos). In doing so we refuse to exclude chaos from our faith and understanding. We confess that this chaos is that chaos. This death is that death. This suffering is that suffering. All suffering is His suffering and we proclaim Christ crucified so that nothing is excluded.

Christ crucified sweeps away our false religions (both Medieval and Modern), our feeble efforts to enchant the universe with explanations and understanding. All the false religions are represented in St. Paul’s rebuke:

“…but we preach Christ crucified, to the Jews a stumbling block and to the Greeks foolishness, but to those who are called, both Jews and Greeks, Christ the power of God and the wisdom of God. Because the foolishness of God is wiser than men, and the weakness of God is stronger than men.” (1 Cor 1:23–25)

I have come to the conclusion that all wars (even and especially our culture wars) are religious in nature. They are wars of opposing religions – or, more accurately, opposing idolatries. They seek to impose order in the face of chaos. Our actions, it would seem, despise the wounds of Christ, before which we should stand in awe and silence.

The Lord (of order and chaos) is in His holy temple. Let all the earth keep silence before Him.