Source: Interfax-religion
Natalya Mihailova | 26 March 2016
Jerusalem, March 25, Interfax - Large-scale restoration of the Edicule (a chapel believed to be constructed over the place of the burial of Christ) starts at the Church of the Holy Sepulchre in Jerusalem. 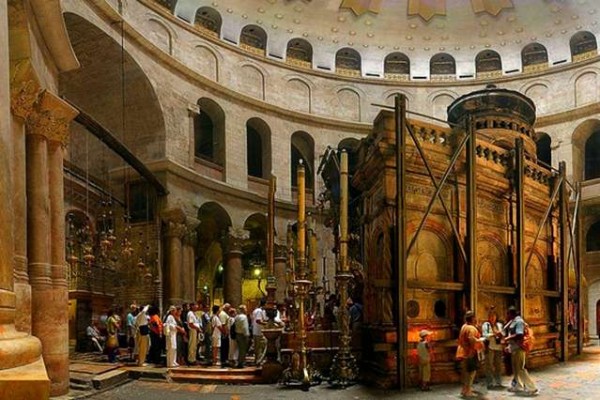 Works will be started after Orthodox Easter celebrated on May 1, and will last for more than eight months. Pilgrims will be allowed to the shrine during the restoration, press service of the Russian Ecclesiastical Mission in Jerusalem reports.

Experts from the Athens National Technical University, staff members of the Florence University and experts from Armenia will carry out the restoration. They will strengthen the construction, renew construction joints of the Edicule, change damaged fragments of the covering, clean the interior from the soot.

The scaffoldings have already been set up at the walls of the Edicule.

For several dozens of years the building was subjected to the influence of the weather as the doom of the rotunda over the Edicule had open hole till 1868. Earthquakes seriously damaged the Edicule in 1927 and 1934. It resulted in the lack of sustainability and threat of partial failure, so steel pillars were set up around the Edicule in 1947 as a temporal measure. Excessive humidity caused by the presence of millions of pilgrims and tourists and exposure to heat of candles also have negative impact on the construction.