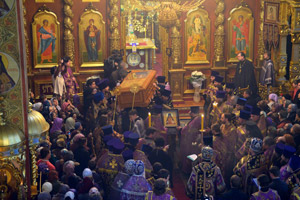 With the blessing of His Holiness Patriarch Kirill of Moscow and all Russia, the commemoration of the Finding of the Holy Relics of St Nicodemus (Kononov), Bishop of Belgorod (October 20 /November 2), has been included in the Orthodox calendar. The shrine with the Holy Hieromartyr’s relics will be placed inthe Cathedral of the Transfiguration in Belgorod, reports Sedmitza.ru.

On November 2, 2012, the incorrupt remains of Hieromartyr Nicodemus (Kononov), Bishop of Belgorod, canonized among the Holy Martyrs and Confessors of the Russian Orthodox Church at the Council of Bishops in 2000, were found in Belgorod. After the remains had been officially identified, His Holiness Patriarch Kirill of Moscow and all Russia resolved: “To acknowledge the uncovered remains as the relics of St. Nicodemus (Kononov), Bishop of Belgorod; and to add to the Russian Orthodox calendar the date of the uncovering of St. Nicodemus’ Relics—October 20/November 2, 2012”. On March 24, 2013, the first Sunday of Great Lent, the feast of the Triumph of Orthodoxy, solemn services were celebrated in the Cathedral of the Transfiguration in Belgorod, led by Metropolitan John of Belgorod and Staryy Oskol, with clergy of the Belgorod diocese concelebrating. At the service Metropolitan John read aloud the Patriarch’s resolution. When the magnification of St. Nicodemus was sung, his precious relics were taken from the altar and placed in the centre of the church, after which the Metropolitan read prayers kneeling before them. The shrine of St. Nicodemus, Bishop of Belgorod, will remain in the Belgorod Cathedral of the Transfiguration permanently. The site of the finding of St Nicodemus’ (Kononov) Relics has been included as a cultural heritage site of the Belgorod region. When the national, historical, and cultural examination has been completed, the shrine of Bishop Nicodemus will be included in the National Register of cultural heritage sites of the Russian Federation. (Report from the Belgorod Metropolia website).