The First Sermon of Christ 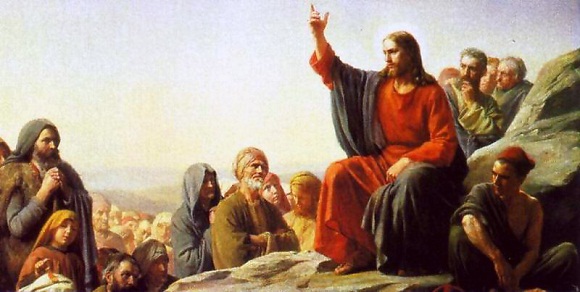 Any classical public speaking training would tell the aspirant lecturer to always start with a little warm up for the audience, in order to get them engaged, then introduce the topic, present the topic and then a short recap at the end. It is all about building up to your main subject.  This is pretty much what I’m doing now.

There is an old story with a priest in a convent that loved to preach. He always used well thought out  phrases, nice metaphors, parables, comparisons,  his subjects were always good, but he would tend to take a little more time than others. The abbess was a little upset about that because this would cut out the time dedicated to the various obediences in the monastery. So she decided she would go and complain to the bishop. As a consequence the priest was called at the chancery and the bishop asked him if possible to stay to the essence and cut the embellishments so the sisters could have more time to work. So next Sunday the Father, a little ticked off about the discussion with the bishop starts his sermon as usual: “In the name of the Father, and of the Son, and of the Holy Spirit. Beloved sisters, repent or go to hell! Amin!” and he got back into the altar.

We might consider this example a little excessive at a first glance, but, at the end of the day, the priest from our story exposed the essential idea that we have a choice in this life and our choice determines our life. Bad choices won’t take you anywhere good – the essence.

Christ as well did not always conformed to the niceties of oratory; on the contrary, His first recorded words to the people gathered around Him were very blunt:  “Repent for the kingdom of heavens is at hand!” (Mathew 4:17). No warm-up, no fancy introductions just the essence of the matter. John said actually the same thing (Matthew 3:2) to the people gathered to be baptized by him in the Jordan. No frills, just what they needed to know.

Repentance nowadays is a very misunderstood word. It has a negative connotation and people think that is something left to do only for hardened criminals with a heavy conscience. But the original meaning of the word in Greek “metanoia” refers to a change of mind. Is the mind we achieve after we have done something wrong and we suffered the consequences. Repentance is something that we have to do if we want to avoid the same mistake. Someone said that you can only make a mistake once because starting with the second time is a choice. Repentance is another choice: to do better next time.

Our relationship to sin unfold in a similar fashion:  you sin once, you see the bad fruits, you should stop doing it. For example: you stole something, you got caught (eventually everyone gets caught) you should stop doing it. Simple, you should learn from your mistakes and set your life on another course. Don’t delay it. If not, you will become a slave of sin and you can’t blame your problems on anyone but yourself.

Our society is in deep need of repentance because it keeps repeating the same mistakes again and again, not learning from them.  The result?  Everything is getting worse, the economy, the education, the family and so on and so on…We seem to never learn.

The fact that John‘s and Christ’s calls are one and the same has a special significance that further exposes the work of salvation in our lives. John’s first call to repentance is a call to meet Christ, to go out, find and  embrace Christ in our lives,  to let Him be born in our hearts so we can grow in Him and Him in us

Christ’s call to repentance is an invitation to aspire at the next level, to change our secular way into His ways, to learn from the emptiness of a life without Him in order to fill it with His presence. It is a call to leave sin out of our lives and embrace virtue, to learn from our mistakes so our future would be brighter.

By future I do not mean a mere 80 or even a few extra years, if we are blessed. By future I mean an eternity in the Kingdom of Heavens. This is the future we are growing by planting the mustard seed of faith in our lives. Its fruits we’ll taste eternally. I’ll say that again, eternally! This promise is the great fulfillment of our creation, is God’s authentic will for mankind: to be with Him forever in a transfigured world as partakers in the love of the perfect Trinity.

We don’t know exactly what the Kingdom will be like, we know it will be a new heaven and a new earth but what does this mean? Jesus only spoke about it in parables comparing it to 10 virgins, a vineyard, a treasure hidden in the field and so on. We also don’t know where the Kingdom is.  Some imagine it as a distant place, unreachable, elusive; others even deny its existence. We are also oblivious of when the Kingdom will actually come: today, tomorrow, next week, in a thousand years?  Many tried to guess it but failed; even the all wise Mayans. It is a great mystery that won’t be solved until it will actually happen.   But we hear from Christ’s very mouth that it is at hand, it is reachable and this is all that matters. When, where, how, is not that critical to know.  What is important is to qualify as a citizen. God will reveal the rest when the time will be ripe.

The martyrs have understood this and affirmed the Kingdom even with the price of their lives and thus receiving crowns of glory from Christ’s very hands. As their faith grew stronger so the Kingdom of God drew closer. The fact is that the Kingdom was right in their hearts. St Ignatius the God Bearer of Antioch said to his executioner that he had Christ in his heart. So to mock him even after they killed him, they cut out his heart and cut into pieces. What they found however to their surprise was the letters ICXC NIKA, Jesus Christ conquers, on each and every piece. Christ had His mark in St Ignatius’ heart.

This kingdom is what we should seek first; everything else is nice but not absolutely necessary.  But seek first his kingdom and his righteousness, and all these things will be given to you as well (Matthew 6:33). This is our primary concern, to make it in the kingdom, the rest is trivia. Repentance is the only way to get there by answering the call of Christ and following in His footsteps with boldness all the way to the end.