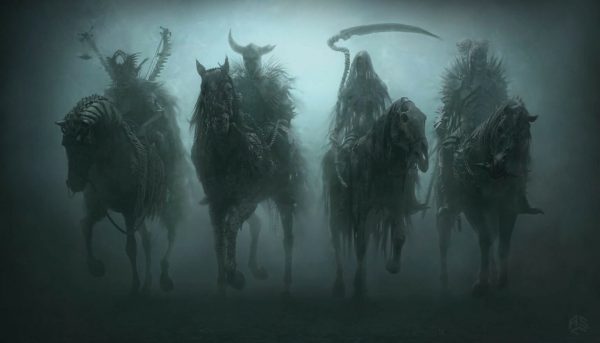 The word “frontier” has long been associated with certain aspects of American mythology. “Frontier Days” is short-hand for log cabins, flintlocks, and the rugged life. Occasionally it takes on aspects of the “Wild West.” In recent generations it has been moved off-planet, such that we hear Captain Kirk intone, “Space…….the final frontier.” It is also a word whose meaning has been forgotten, as our mythology has overtaken it. Originally (15th century), the word comes into use as a reference to the borders between countries. A frontier…is a boundary. This remains the case and is its primary meaning. It is also, however, a reminder that our culture was born in the actions of ignoring boundaries. It is indicative of a cultural narcissism that has afflicted us for centuries. We’re not good at boundaries.

Many societies have pushed against their boundaries. France and Germany notoriously battled over what, exactly, was to constitute their border. England and Scotland did much the same. Such territorial disputes are probably inevitable (unless established by a river or a mountain range). The American experience was something unique. Here, the “boundary” (frontier) began at the Eastern shoreline and continued to the Western shoreline. The entire country was “frontier.” “Pushing the boundaries” was a way of life.

This should be borne in mind when thinking about the modern mantra of progress. Progress in America has always carried with it the assumption that boundaries (frontiers) exist in order to be overcome. The ultimate paradise would thus be a condition in which all boundaries would disappear. We speak of the “frontier” of space, the “frontier of science,” even the “frontiers of morality” (all of them targets for progress and boundary-breaking).

In point of fact, a healthy life is marked and shaped by various frontiers. It is only boundaries that allow us to see and know. Boundaries are an inherent and essential part of personal existence. The very heart of the Christian understanding of God is that He has a tri-personal existence: Father, Son, and Holy Spirit. Within the very mystery of the godhead are boundaries. The Father is not the Son, the Son is not the Father, on so forth. Thus, true existence, is never without boundaries. We understand that, created in the image of God, we ourselves have a personal existence. Beyond this, our spiritual fathers teach us that we do not yet fully possess such an existence, that it is something towards which we are moving. In that understanding, if we speak of “progress” in the spiritual life (which I am loathe to do), such progress would not be the violation of boundaries, but the fulfillment and perfection of boundaried, personal existence.

Modernity, as the violation of frontiers, urges us towards a knowledge and way of life that consumes and absorbs, ever crossing boundaries in its pursuit of progress. In the 1960’s, Crosby, Stills and Nash sang, “Rules and regulations! Who needs them! Throw them all out the door!” a paean to the riots at the 1968 Democratic Convention in Chicago. It was a silly mantra, but resonated with those who imagined themselves at the frontiers of change. Narcissism makes for easy revolutions, but with destruction and misery as its primary result.

The boundaries of personhood are at the very heart of Christian love. Our profession that “God is love,” is a recognition that the truth of all things requires, not just the recognition of boundaries, but their respect. When the Scriptures say that love is “patient and kind,” it is describing life rightly lived with regard to the boundaries of others. Our impatience often insists that God intervene, set aside the boundaries of our freedom, and fix the world. That would be the modern god. It is, unsurprisingly, an apt description of the modern idea of government.

Love is the “weakness” of God. His love can be frustrating, even maddening, when we long for our will to be made dominant. In the face of human suffering, Christ suffers. This is not the answer we desire from our gods. In our culture, love is understood to be a desire, or a passionate mark of brand loyalty. We want to possess the other.

Boundaries (and, thus, love) requires that we endure healthy shame – for this is the emotional experience that comes with boundaries. The virtue of enduring such healthy shame is known as humility. Love is impossible without humility. Many are surprised when they first hear that God is humble. Christ said, “Take My yoke upon you and learn from Me, for I am meek and lowly in heart, and you will find rest for your souls.” (Matt. 11:29) This is not a temporary “role” assumed by Christ, but a true revelation of the nature and character of God.

Like God Himself, Paradise contains boundaries (the commandment not to eat of the forbidden tree). There is no path to paradise that does not include boundaries – and the healing within us that allows us to live with them. The true unexplored frontier of our time is the mystery of a boundaried existence. We will either learn to become persons or devour one another even as we have devoured the planet on which we live.