Our national discourse seems to have revolved almost entirely around fear. It is a terrible way to live. We fear poverty, starvation, cancer, crime. We even fear the truth and honesty. “What if people knew how I really felt, who I really am? Surely, they would not like me.” So we run from the things that frighten us. We live in gated communities, we take lots of pills, we drink lots of alcohol, we eat lots of food, we watch lots of television, anything to take away our fear.
Archpriest Antony Hughes | 12 November 2011

Then they sailed to the country of the Gadarenes, which is opposite Galilee. And when He stepped out on the land, there met Him a certain man from the city who had demons for a long time. And he wore no clothes, nor did he live in a house but in the tombs. When he saw Jesus, he cried out, fell down before Him, and with a loud voice said, “What have I to do with You, Jesus, Son of the Most High God? I beg You, do not torment me!” For He had commanded the unclean spirit to come out of the man. For it had often seized him, and he was kept under guard, bound with chains and shackles; and he broke the bonds and was driven by the demon into the wilderness. Jesus asked him, saying, “What is your name?” And he said, “Legion,” because many demons had entered him. And they begged Him that He would not command them to go out into the abyss. Now a herd of many swine was feeding there on the mountain. So they begged Him that He would permit them to enter them. And He permitted them. Then the demons went out of the man and entered the swine, and the herd ran violently down the steep place into the lake and drowned. When those who fed them saw what had happened, they fled and told it in the city and in the country. Then they went out to see what had happened, and came to Jesus, and found the man from whom the demons had departed, sitting at the feet of Jesus, clothed and in his right mind. And they were afraid. They also who had seen it told them by what means he who had been demon-possessed was healed. Then the whole multitude of the surrounding region of the Gadarenes asked Him to depart from them, for they were seized with great fear. And He got into the boat and returned. Now the man from whom the demons had departed begged Him that he might be with Him. But Jesus sent him away, saying, Return to your own house, and tell what great things God has done for you. And he went his way and proclaimed throughout the whole city what great things Jesus had done for him.

In the Gospel story of the Gadarene demoniac we are often distracted by the elements that are so unlike our normal, everyday lives. Here we see a wild, violent, frightening example of the kind of possession that Hollywood loves. We have a naked man, living in a graveyard, scaring the dickens out of the townspeople, so powerful that chains could not hold him. The hero comes, sets him free, sends the demons (creatively) into a herd of swine who rush off screaming over a cliff into the sea to drown!

But today I want us to look at a detail of the story that is near to all of us. That is fear.

Of all the elements of the story that there are to chose from, I most relate to that of fear. Everyone in this story, with the exception of Jesus, was afraid. The demoniac was afraid and the townspeople were afraid. Even after he was healed the townspeople were still afraid! Fear drove the man to isolate himself in a graveyard, a place that consistently invokes fear from which he not only lived in fear, but made it his business to frighten anyone who happened by. Evidently, this atmosphere of fear was a focus of life in the region of the Gadarenes. Who among them did not know the story? I imagine that Gadarene parents used the demoniac to scare their children into obedience like we do the boogeyman. A terrible thing to do really, but nevertheless, fear can be a powerful incentive.

Fear is something with which we are all familiar. Since 911 many Americans have lived in fear that terrorists will kill them. Our national discourse seems to have revolved almost entirely around fear. It is a terrible way to live. We fear poverty, starvation, cancer, crime. We even fear the truth and honesty. “What if people knew how I really felt, who I really am? Surely, they would not like me.” So we run from the things that frighten us. We live in gated communities, we take lots of pills, we drink lots of alcohol, we eat lots of food, we watch lots of television, anything to take away our fear. As all fans of Frank Herbert’s science-fiction classic DUNE know, “fear is the mind-killer.” Ultimately, all of these little fears come from the one big fear, that is, the fear of death. 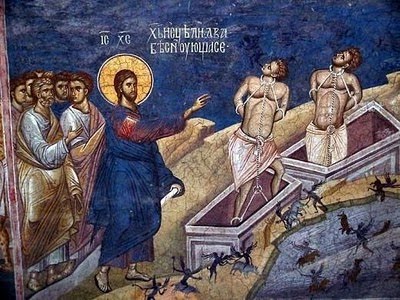 It is curious that the Gospel calls us to do something quite different than we are used to doing with fear. It invites us not to run away from it. Jesus did not run away from the demoniac. He met him face to face. He did not run away from Calvary. He met death face to face. Of course, he was afraid! Read the account of his agonizing prayers in Gethsemane! But courageous people are not those who have not experienced fear, but rather those who know it intimately and who do not let it rule them. We are invited to meet our fears head-on with faith and hope in God who will never forsake us. If we do, we will discover that the monster we so feared is not so fearful after all. A Tibetan Lama and his disciples once came upon a ferocious dog chained in the yard of a villager. The dog snarled and barked to beat the band and then broke free of his chains, like the demoniac, and rushed at them. All began to run in fear, except the lama who gathered up his robes and rushed straight at the dog looking him straight in the eye. The dog stopped in his tracks, turned and ran away in fear.

St. Antony was like the Gadarene demoniac with an important difference. St. Antony went, like the demoniac, to live in the tombs, but he did so not because he was driven there by fear, but in order to meet his fears and overcome them. I think all the stories about his battling demons in the guise of animals and other things are mostly symbolic of the battles he fought with his own fears than with supernatural creatures. But whatever the case, Antony did not win his struggles by running away from the tombs, he won it by staying put, by prayer and meditation, by fasting, in other words by facing all that he had to face with courage and with faith in God who promised to be always near. After a particularly harrowing battle Antony asked God, “Where were you?” A light came into the tomb and a voice said, “I was here all along.” It is an example that we need to follow.

We all have problems we need to face, fears that need to be admitted, sins that need reconciling and this cannot be done by hiding from them or pretending that they do not exist. Instead of running away we need to stop and look deeply at what it is that troubles us. We need to let go, to relax, to welcome the opportunity to face these things when they arise. I often tell the children at Antiochian Village before they come to confession, often for the very first time, that all God asks of us is to be as honest as we can be about who we really are. I think the Church, as you have heard me say before, is the place where we should be able to be completely honest without fear of judgment, or consequence. Unfortunately, that is not always the case. Fear of reality often motivates even the clergy to run away when faced with things in others that remind them of what’s going on in their own lives.

The Lord invites us to leave our fears behind and come to him as we are.