The Gadarenes are Us

Source: St. Mary Orthodox Church, Cambridge, MA
The dialogue that is good and natural to us who are made in His Divine Image occurs between God and the human heart. St. Paul calls it “unceasing prayer.” But it is drowned out by an unholy dialogue, the flow of unruly, chaotic repetitive thought that has no direction, no reason, no hope. When we are hooked into the natural, divine dialogue of “unceasing prayer” the fruit is freedom, reason, peace, and glorious, graceful silence. The chaotic dialogue of the mind results in exactly the opposite: slavery, confusion, fear, and noise.
Archpriest Antony Hughes | 13 July 2014 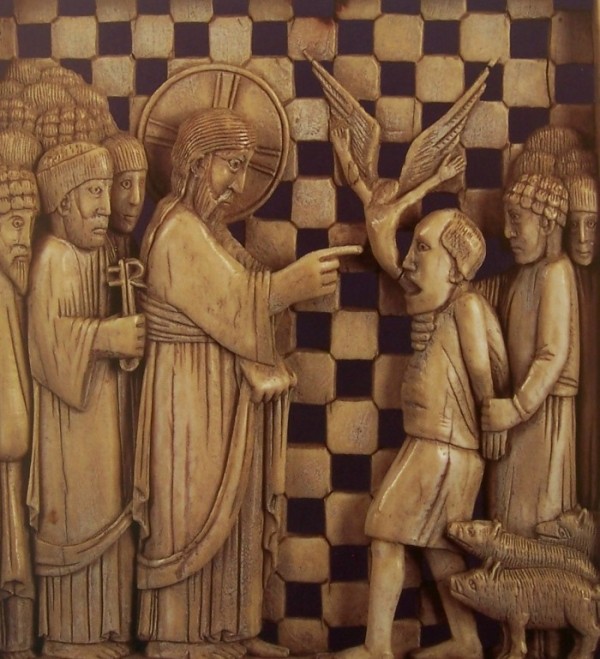 We look at the Gadarene Demoniacs and think, “Thank God I am not like them.”

But are we so different?  I think not, for we all have to some degree forgotten or lost a conscious connection with the deepest truth about ourselves: the inherent dignity of being made in God’s image.

Demon possession overall is marked by a loss of freedom.

We pass by the homeless woman who talks to herself and are grateful that we are not like her. We say to ourselves, “She must be crazy.” But look closer!  That same incessant dialogue she exhibits with her lips is going on in our heads!  Are we any less crazy because we hide it better?   The chaos in our minds is a sign that we have lost our way.  When the interior dialogue becomes external, it is only the tip of the iceberg.

The dialogue that is good and natural to us who are made in His Divine Image occurs between God and the human heart. St. Paul calls it “unceasing prayer.” But it is drowned out by an unholy dialogue, the flow of unruly, chaotic repetitive thought that has no direction, no reason, no hope. When we are hooked into the natural, divine dialogue of “unceasing prayer” the fruit is freedom, reason, peace, and glorious, graceful silence.  The chaotic dialogue of the mind results in exactly the opposite: slavery, confusion, fear, and noise.

Another example of what happens when we lose touch with the image is the disease of addiction.   “Thank God,” we say, “that I am not like that alcoholic neighbor of mine!”  But look again! Addictions come in all sizes, shapes, and forms, such as,  money, food, alcohol, drugs, sex, possessions, relationships, religion, and most certainly our addiction to the ego.  Are we any less crazy because we manage somehow to remain on the right side of the law because we are better at hiding our addictions?  We are simply better at pretending everything is ok.  As the disease progresses even that disintegrates.  We will reap what we sow eventually.

There are deeper and even more insidious “possessions” that manifest themselves in subtle ways that are no less cruel and horrible than the sensational images Hollywood portrays. These eventually become part of the fabric of society. They often do not draw our attention until it is too late and innocent people suffer and die.

Think of the senseless cruelty of teenage bullies that drive their victims to suffering and suicide.  “Senseless” is the operative word.  Is this not demonic?

Think of the blindness and apathy that excuses us from taking care of the poor, orphans, and widows in their affliction which is true religion. St. James told us so. Is this not demonic?

Think of the systemic evil that excuses our society from caring for the environment and the unemployed as it should, that personifies and prefers corporations and ideology over human beings, that exchanges the compassionate approach of God and His Son for the cold, legislative indifference of government decrees, that enforces and perpetuates the caste culture of America, empowering the strong and trampling upon the weak.  I am not sure why the townspeople beg Jesus to leave after he cures the demoniacs, but Matthew implies that it had something to do with the drowning of the swine.  Jesus is not always good for business!  God values human beings over profit.  Our society does not.

Think of the systemic evil that often possesses religion.  How much evil has been done in the name of Christ?  How many have used the scriptures and the church to become rich and powerful?  How many wars, how many pogroms, how many persecutions, how many genocides, how cases of child abuse have been performed by sincerely religious people with sincerely pious, but utterly misguided intent?

These things are as demonic as what we see in today’s Gospel.  And what is worse, they go on under our own noses and we don’t even recognize it. When we do, we are either too afraid to do anything about it, actually support it, or just don’t care.

Behind all of these demonic manifestations is a common delusion.  Pride and arrogance.  From the middle-aged addict to the corrupt corporation the god of ego replaces the God of Love.  It is no longer God who is and possesses the Truth: I do.  Behind the addict, the diseased society, and the corrupt corporation lays the inability to admit the disease.  In spite of all evidence to the contrary, each one believes themselves to be in possession of the truth or, even worse, believes themselves to be the truth.  At base the demonic disease rises from idolatry.

Do you think God places the commandment to worship no other gods because he has an infinitely insatiable ego?  No. The commandment is not for God’s benefit, it is for ours. It is because idolatry is an evil in and of itself.  It kills both the soul and the body and overflows to wreak havoc on the world.

The temptation to believe that at any given time I possess and understand the whole truth is the greatest delusion of all.  Having some knowledge is hardly the same as having all knowledge. From this point no growth can occur.  St. Gregory of Nyssa proclaims, “Sin is the refusal to grow.”  I would add, “Sin is the belief that no further growth is necessary.”

The presence of Jesus draws out evil like a surgeon lances a boil.  His presence sheds a light that no darkness can dispel.  He brings with him the Kingdom of heaven and often that makes us uncomfortable.  Where Jesus is, there is His kingdom.  If we desire to live in it, we must endure His medicine, his scalpel and his fire.  We must be courageous and allow him to call out and name our demons.  We must fearlessly allow ourselves to change, to become new, to replace one paradigm with another, to leave behind everything, no matter how dear, that is not part of Christ’s Way, Truth, and Life.  We do not get to decide what that means.  All we can do is walk towards him as best we can and watch the internal scenery change as the god of ego is replaced with the God of Compassion. 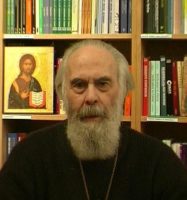 “Every Act of God is Challenging…
Metropolitan Anthony of Sourozh

In the Name of the Father, the Son and the Holy Ghost. How familiar is this… 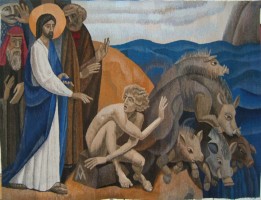 Choosing to Be Free of the…
Priest Robert Miclean

With regard to demonic possession, we have no reason to believe that it does not continue…