The Gifts of the Magi

And when they had opened their treasures they presented unto Him gifts: gold, and frankincense, and myrrh. (Matt. 2:11)

Not without reason, my brethren, were there three gifts at the manger Of Christ; three–no more, no less. Was this a sign of the Most Holy Trinity as the essence of the Godhead; or did it symbolize the triune nature of Christ’s future ministry: prophetic, royal, priestly; or was it perhaps an expression of the three parts of the nature of man: spirit, soul, and body? We leave it up to your faith and reasoning to consider this question. Here our attention rests upon the gift-‘bearing magi.

One could say that these pilgrims of the Orient stood before the manger of Christ for all mankind. Their gifts represent symbolically all that we, followers of the Saviour, bring to Him. The gold signifies material gifts; the frankincense–immaterial gifts, gifts of the spirit; and the myrrh represents those gifts that are at once both spiritual and material. There are, accordingly, persons who bring the Lord gold; there are those who bring frankincense; still others bring myrrh; lastly, some bring several gifts together. Who are these individuals? In examining this question, we shall see how we too, like the  magi, can serve our Lord and Saviour. Who brings the Lord gold? 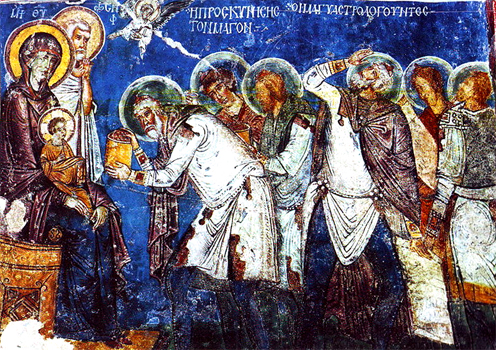 Gold is brought by those who, for the glory of God and the benefit of their neighbor, offer anything of their labor s and possessions. For example, you bring gold to the Lord if you build, renew or adorn God’s temple. Your gift pleases Him, for even though He sits now on the throne of glory, for the sake of our salvation He continues at the same time to appear in the manger as well. This manger is present in church upon the table of oblation, where at every Liturgy He is, as it were, born again so as to offer Himself anew as a sacrifice for our sins. How often He suffers want in this manger. Here He needs both clothing and shelter, light and warmth. Therefore, if you do anything for the benefit of the church, your offering delights the Lord -as much as did the gift of the magi who brought Him gold.

HOW much of this gold is brought to the Lord? Oh, if we were to compare what is brought with that which is spent to answer the demands of the passions, for the satisfaction not only of our needs, but of our very whims–or even With that which is patently surrendered for the flesh and the world to consume–then it shall turn out to be the very smallest part ….   Before us a poor man shakes from bitter cold, hunger, and disease; we either rebuff him harshly or give him a measly pittance, and that same day we are ready to exhaust half our fortune in a senseless game, or to display Our munificent squandering at some gaudy spectacle.

Such is our gratitude to Him Who, being rich, for our salvation is this day embeggared, that we through His poverty might be rich (II Cor. 8:9).

Who brings the Lord frankincense? These are they who apply their abilities, knowledge, and talents to the glory of God and the benefit of their neighbors; for these are immaterial gifts of greater value than gold or silver.. These are gifts which God gives to men but, they, also are–and should be made–men’s gifts to God.

This costly frankincense is offered to the Lord by each one who, sparing not himself, serves his neighbor. Frankincense is offered to the Lord by that shepherd of the Church, who faithfully stands alert guarding souls and hearts against the confusions and temptations of the age, who ardently proclaims the ways of the Lord, who guides those who have lost their way, comforts those in despair, instructs all. Frankincense is brought to the Lord by that mother who does not rely upon servants, who does not spend time in idleness and vain amusements, but rather devotes her time and abilities to the rearing of her children in the fear of God, to nurturing in them the habit of self-denial, the spirit of meekness, of prayer, and of love for mankind. Permeating the home, the fragrance of this frankincense is thereafter diffused everywhere by those who received in that home a pious upbringing. Frankincense is brought to the Lord by that artist who does not utilize his talents to pander to human lust in keeping with the spirit of the time, but rather, strives to turn all his creative powers into m e a n s of disseminating–‘with the refined and beautiful–What is True and good, This frankincense envelops many with its heavenly fragrance. And just as there is no -one who does not possess abilities or talents of some kind, neither is there anyone who is unable to bring the Lord frankincense by using his abilities to the glory of God and the true profit of his neighbors.

The third gift to the Lord from the magi · was myrrh. This was the last gift and there- fore more exalted than gold or even frankincense. What kind of gift is this, and why is it so important? Like frankincense, myrrh exudes a heavenly fragrance, but its distinguishing quality lies in its great bitterness; for this reason it represents our trials and sorrows, our tears and sufferings.

Now it is clear who brings to the Lord the gift of myrrh. They bring it who patiently bear trials in life and suffer blamelessly without giving in to bleak despair, nor fainthearted complaining, nor useless sighing; those Who, in enduring their trials, are moved neither to prideful scorn towards others, nor to the desperate stifling in themselves of all · human feeling, but to a lively hope in the living God–to the thought that through suffering he or she is cleansed from sins, made perfect in virtue, and, what is even more gladdening, made like unto their Saviour Who, died for them upon the Cross. Such endurance, in the spirit of faith and love, of the tribulations and sorrows of the age is also a gift to the Lord, a gift more precious than ~old and of a sweeter savor even than frankincense.

May all those who suffer cruelly hear this, and may they come to fathom the advantage of their condition which is seemingly bitter, but actually not without its sweetness if only they consider their faith and the Cross of Christ. May they hasten to bring their myrrh to the Lord as a gift. Those who are satisfied in this world cannot do this; unacquainted with want, they seem to lack nothing; but they have no myrrh. Many of those who possess frankincense-that is, exceptional talents, also cannot do this: they have no heavy trials to bear, no myrrh. It is all with you, God’s bloodless passion-bearers; you, who through no guilty act of your own–whether by the lot of your birth or by the perversity of circumstance, by human malice or by our corruptible physical nature–greet virtually every day, and also end it, with sighs; and who, it may be, this very morning greeted Christ’s holy Feast day with tears. Those who look upon you disdain your hardship; you yourselves, perhaps, stumble at times beneath the weight of earthly trial. But we, in the name of our Saviour, greet you with the precious likeness of His Cross! Cherish the precious myrrh which you have received as your portion; do not exchange it for frankincense, and even more guard against trading it for mere gold. And do not rob it of its heavenly fragrance by complaint or fainthearted murmuring. What is the use of complaining? The Lord sees everything without it. Each of your tears counts with Him, each of your sighs knows its weight–and in time you shall receive for all of these a hundredfold.                                 Amen.

Translated by Maria Belaeff from a leaflet published by the Vladimir Mother of God Convent, San Francisco

Homily on the Feast of the Ascension of the Lord

The Lord’s path should be the path of each and every one of us. The Lord suffered for…

Most viewed articles
Blasphemous and Obsessive Thoughts Come Into My Mind. What Do I Do?154
An Extraordinary Session of the ROCOR Synod of Bishops Convenes113
Funeral Services for His Eminence Metropolitan Hilarion of Eastern America and New York79
Is God a Fool?73
How to Respond to Opposition to the Gospel56
Metropolitan Joseph, Bishop Thomas Celebrate Centennial of Little Falls Parish55
A Piece of Rock Falls Down on the Skete of St. Anna on Mt. Athos43
PRAY: 14 Students, One Teacher Dead After Texas Elementary School Shooting41
His Beatitude Metropolitan Tikhon Issues Statement on Tragic School Shooting in Texas29
Most popular authors
Pravmir.com team235
Fr. Eugene Murzin154
Archpriest Stephen Freeman73
Archpriest Basil Ross Aden56
Subdn. Peter Samore55
Associated Press41
Metropolitan Tikhon of All America and Canada29