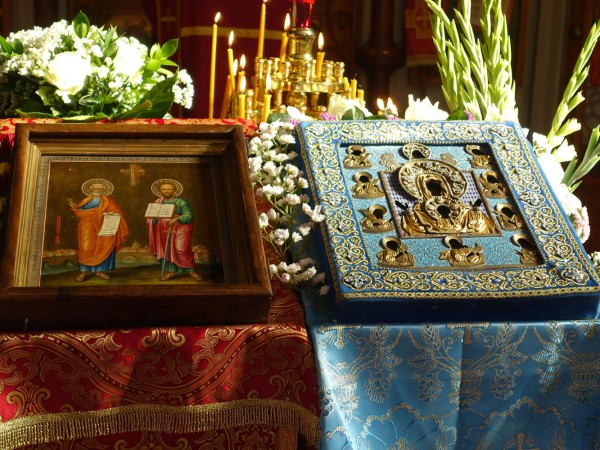 More young people, young families and little children come to church, bringing joy to the older generations, who remember the small choir and the large expanses of exposed walls of the church. This year it was almost impossible to enter. About 10 bright, beautiful voices sing in the choir now under the direction of Elena Witel. Though crowded, the parishioners piously heeded the words of His Eminence Archbishop Michael of Geneva and Western Europe, who came especially to celebrate the church feast day of SS Peter and Paul. 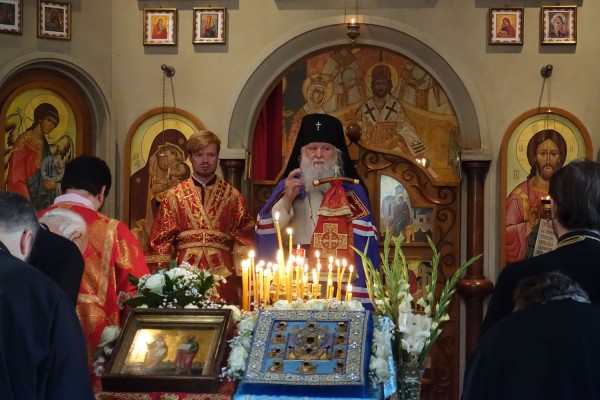 Many of them tried to stand beside the miracle working Kursk-Root Icon of the Mother of God “of the Sign,” brought here from New York. Every church has its own history with this icon, thanks to the multitude of prayers before it. It was before this icon that our Protopriest Serge Pouch prayed 40 years ago, when he gave his promise to build a church in his second homeland, Luxembourg, if he would be granted healing. And so it was that in 1979, the first corner stone was laid down. Three years later the church became a “jewel of Luxembourg,” as guidebooks now describe it. Located in the quiet central region of Limpertsberg, the 5-cupolaed church invites parishioners and guests to Orthodox services every Saturday and Sunday. 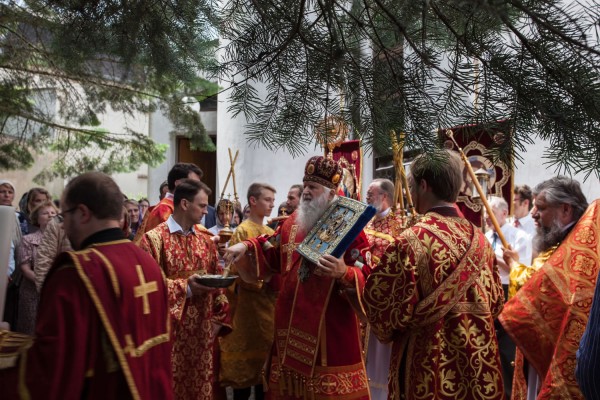 Fr George Machtalere, has for over 3 years been replacing the parish rector, Fr Serge. His sermons reach the heart of every worshiper, the leitmotif is always the same: “Just let us just try!”

And indeed he tries, gaining confidence in his ministry with the flock, the choir, and in organizational matters. The ailing Fr Serge is always commemorated during services. Many years and the Luxembourg hymn, Ons Heemecht , were sung during the trapeza luncheon to honor Fr Serge and Grand Duke Henri, since by tradition, the Russian community celebrates the state holiday on its feast day.

There were guests from all over Europe in attendance on the feast day, clergymen concelebrated with Archbishop Michael: Protopriest Stephan Weerts from Brussels; Protopriest Peter StUrm from Zurich; Protopriest Emilian Pochinok of Geneva; Protopriest Igor Ephremushkin from Prague, as well as our own Fr George, and Protopriest Spyridon Tsekuras from the Exarchate of Constantinople in Luxembourg.