The Ladder of Your Daily Life 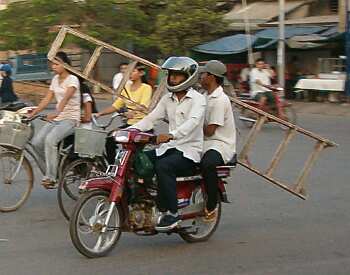 Perhaps the most prominent ladder in our culture is the one associated with careers. It is an image of the American road to success. We begin at or near the bottom and, step by step, make our way towards the top. It is a metaphor that works well with our modern notions of hard work, persistence and reward. It also serves as a justification for many of the structures in our society and colors our common view of those who linger around the bottom. It is through this cultural image that the Ladder of St. John of Sinai (Climacus) comes into distorted view. I have often thought that certain images are not safe in the hands of modernity – and this is one of them.

There is something buried deep in the human soul surrounding the image of climbing and God. The story of the Tower of Babel is an account of a vast human effort to build a tower that would reach into heaven itself. One of the ancient Ziggurats built by Nebuchaneaer was called, “The place where earth and heaven meet.” Mountains have always played a major role in the meeting place of God and humanity. Our instinct is that we “go up” to meet God.

The Tradition clearly indicates that this instinct has value. But like all human instincts, it has its dark side as well. Our culture’s notion of the “pinnacle of success” is a prime example of this darkness. By its very name, this peak experience is held out as a desirable goal. But we have the strange reality that those at the top are rarely personalities that we would want to nurture in our children. There is nothing that the pinnacle offers other than money and power, neither of which is beneficial to the soul.

This distorted “ladder” often gets translated into the moral life in what is little more than an exercise in Pelagianism. Our struggles for moral improvement frequently have more to do with our inability to bear the shame of moral failure than of any desire for goodness. As such, they are a neurosis rather than a morality. St. John gives us a “ladder” for our consideration. It is worth noting, however, that the fourth chapter in his work concentrates on shame – with the observation, “You can only heal shame by shame.” This is not a “ladder” in any modern sense of the word.

Consider the Beatitudes. Christ offers something of a “list” as He reveals the nature of His Kingdom. Who are the blessed?

The list is not a ladder, a movement from one virtue to another. It is, however, a characterization of the “virtues” that find their place within the Kingdom. Who are these people?

It would seem that there is a consistent picture of those who are best positioned regarding the Kingdom. They are poor, disadvantaged, oppressed, and sorrowful. They are also longing for things to be set right, while at the same time they are merciful and kind towards others.

This same summary can be seen throughout the gospels and in St. Paul:

The ladder of the spiritual life leads downwards rather than up (or it leads us back to where we already are). The lives of the saints are replete with those who abandoned wealth in order to become poor and find God. I can think of no stories in which a saint acquired wealth in order to enter the Kingdom.

I do not think it is necessary for everyone to abandon what they have and head to the deserts. It is sufficient, in my experience, to simply practice mercy, kindness and generosity where you are, and to bear your own failings and incompetence with patience. And, though this sounds easy, it is more than most are willing to do.

I am always leery when asked about various spiritual undertakings. Whether it’s a rule of prayer or a rule of fasting, the true struggle is never found in doing what is extraordinary. It’s the very difficult matter of enduring what is given to us. God, in His providence, allows us all that is necessary for our salvation. Grace is primarily found within the ordinary faithfulness of our life.

Of course, the monastic example might make many question this “ordinary” route. What is not seen by most is the exceedingly ordinary task that confronts the monastic. The greatest struggles within a monastery are not always in the prayers, vigils and fasting. Most often, they are found in the daily grind of remaining in place. It is said in the desert, “Stay in your cell and your cell will teach you everything.

We can also know that the good God who loves mankind will never abandon us. No matter how far we may run from the mundane struggles of our existence, the struggles will follow. It is among the promises of Christ: “Sufficient for the day is its own trouble.” (Matt. 6:34)