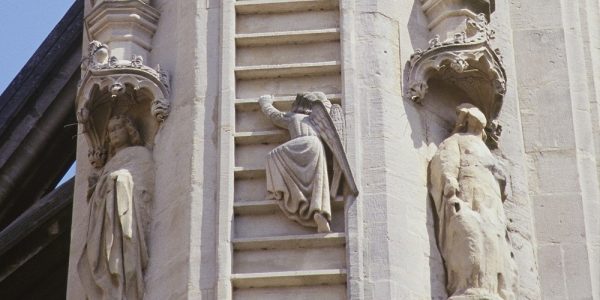 On the front face of the little abbey in the city of Bath in Somerset, England, are carved two stone ladders. These ladders run up and down the face of the church, on either side of the great wooden doors. If you look carefully, you can see carvings of angels climbing up and down the ladders, which lead up to the very top of the abbey roof – all the way up to Heaven.

It only seems right that we should read in the Gospel about the rungs on the ladder Christ gives us for the Christian life – the Beatitudes from His Sermon of the Mount. The Lord’s Beatitudes give us a simple set of steps we must climb toward God: Saint John of the Ladder goes into much greater detail for those who are serious about the Christian spiritual life. If we think we are up for the more advanced spiritual path – Saint John’s Ladder of Divine Ascent – we should first consider the Lord’s ladder, given in the Sermon of the Mount.

If we really want to be a Christian, Christ first calls us to be poor in spirit – to be humble – like the first Christians were prophesied to be, according to Saint Hilary of Poitiers. It’s hard to imagine that today in a world where some church celebrities compete for worldwide authority, and where we as individual Orthodox Christians too often compete for comfort in a secular world.

Next, Christ calls us to mourn – not over death, but over our sins. This has to happen on a daily basis. If it doesn’t, it’s very easy to get the impression that we don’t have any sins, or to start dwelling on the sins of other people.

Thirdly, Christ tells us that if we want to be blessed, we must be meek. Saint John Chrysostom says that if we are meek, we won’t have to wait until we die to be blessed – we’ll be blessed in this life. What does it mean to be meek? One explanation of meekness was, having the power to do harm, and not doing it. For a Christian, that decision must extend to the heart as well: deciding not to do harm, but also, not to hold onto resentment.

The Lord says that we shall be filled if we thirst after righteousness: one of the Church Fathers tells us that if we do this, we will have no fear of loss or death – which really makes one wonder what most Orthodox Christians are thinking in their fearful hysteria in the midst of the coronavirus.

Furthermore, if we show mercy and have a pure heart, Christ says that we will see God, and have mercy from Him when we do. That’s a good measure we can use to see if we have a pure heart: we can ask ourselves if we are ready to see God, right now, as we are. The answer is probably, no. Saint Augustine says that the inward order of our heart has to correspond to the order in Heaven. It shouldn’t surprise us when so many Orthodox Christians – including priests, bishops, and our faithful – say and do things that really don’t correspond to the order of Heaven. Maybe that’s the reason we are so afraid of death, even though we know Christ is risen.

The Lord also tells us that our reward will be great in the Kingdom of Heaven, if we have been reviled and persecuted and spoken against for His sake. This one is not too hard in the times we live in, as long as we do not hide the fact that we are Orthodox Christians, or try to make out that Orthodox Christianity is pretty much compatible with everything they are teaching in modern seminaries and social justice seminars. Those folks will unfortunately be out of luck: no one is going to persecute them at all.

If we do get persecuted, Saint Augustine tells us that with the persecution – however small – will come God’s powerful grace, which will not only help us in every situation, but will also keep us free from anxiety.

There are many more steps outlined in the Ladder of Divine Ascent by Saint John of the Ladder: the Beatitudes that we just read are a much shorter, simpler, and basic ladder toward God.

They are really the same kind of ladder – neither of them is easy.

If you have ever had the chance to stand in front of those stone ladders with the angels on them on the front of Bath Abbey in England, there is one other thing you will notice:

Almost no one notices them.

That abbey is next to a busy tourist spot, and most people are there for a vacation, for the entertainment, for the distraction. They are not there to find the Ladder of Divine Ascent to the Kingdom of Heaven.

The difference for us in the Church is, we are.

Or at least, we are supposed to be.