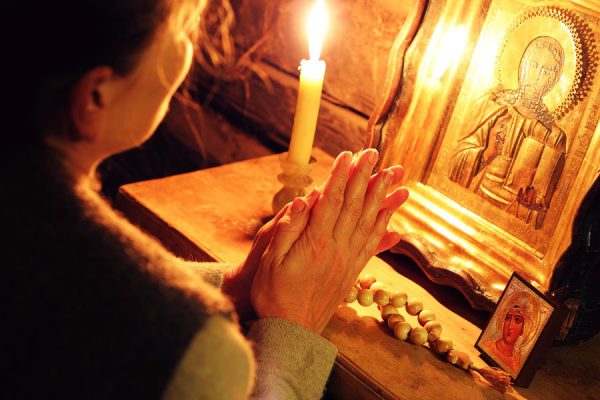 The next petition in the Lord’s Prayer is, “Lead us not into temptation, but deliver us from evil”. These two conjoined sentences should be considered as a single petition in Hebrew poetic parallelism, like the earlier petition, “Thy Kingdom come, Thy will be done on earth as it is in heaven”, because in the Lukan version we read only “lead us not into temptation”. It is unlikely that Luke’s version would omit one of the petitions of the prayer. It is more likely that he considered the bidding “deliver us from evil” simply as an expansion of the petition asking safety from temptation.

There are some issues of translation. The King James Version and the Anglican Book of Common Prayer both render the final clause as “deliver us from evil”—i.e. deliver from the reality of evil, either from evil overwhelming us, or us succumbing to evil actions, or both. It is from these Anglican sources that this particular wording found its way into English culture so that it is the most familiar version of the Lord’s Prayer for many English speakers today. A more accurate rendering from the Greek would be “deliver us from the Evil One” [Greek tou ponerou], since the presence of the definite article indicates a personal reality, not an impersonal one. That is, we do not ask to be delivered from evil in the abstract, but from the machinations of Satan.

The word “Satan”, though it meant merely “adversary” in its original Hebrew (thus its use in Psalm 109:6), came to function as a personal name for the devil (thus its use in Matthew 4:10, 2 Corinthians 2:11, and Revelation 12:9). It would seem that the Lord did not want the personal name of the Enemy to feature in the model prayer He gave His disciples, and so He used the circumlocution “the Evil One” here. It is also possible that Luke omitted this part of the two-fold petition from his version, since his pagan audience would be less familiar with the verbal usages and world-view of Judaism. Not having the figure of Satan in their mythologies, they might have simply found the reference incomprehensible, and asked, “which evil one?” Perhaps that is why Luke subsumed this last clause into the first one, summarizing it all in the words, “lead us not into temptation”.

It is crucial for us to recognize the importance of spiritual combat. As Christians we do not simply face temptations that come from our fleshly appetites and the seducing applause of the worldlings around us. The challenges facing us come from the Devil, as well as from the World and the Flesh. The evil we face is thus more potent and deadly than if it came merely from men. For the evil that lurks in the hearts of men is mixed with at least some goodness in those hearts, since all men are made in the image of God. But there is no goodness left in the heart of Satan. In him we face pure malevolence—malevolence made all the more deadly since it is combined with cunning schemes. As St. Paul said, “We are not ignorant of his schemes” (2 Corinthians 2:11). One also thinks of the words of the Lutheran hymn, A Mighty Fortress is our God: “Still our ancient foe doth seek to work us woe; his craft and power are great, and armed with cruel hate, on earth is not his equal”. Luther might have got a few things wrong from the Orthodox perspective, but he was not wrong about the craft and malice of the devil.

This belief in a personal devil sets us apart from many in modern culture, for whom belief in a personal devil is a barbarous vestige of medieval superstition. I remember even one Orthodox writer opining that Orthodox Christians need not believe in a personal devil. “The Devil,” he wrote, “is just ‘evil’ with a ‘d’ in front of it!” Such a writer can scarcely have read the New Testament or the Fathers or an Orthodox Prayerbook, all of which take for granted a belief that Satan is real. Satan is, according to our perspectives, a fallen angel, one who led a pre-temporal rebellion against God so that he and fellow-angels were expelled from heaven’s courts and became demons. For him this combat is personal: he hates God but cannot destroy Him, so he vents his wrath upon us, intent on marring, corrupting, and destroying God’s image (i.e. us).

How does the Evil One do this? By inundating us with peirasmos. The word usually rendered “temptation” in the Lord’s is peirasmos, often rendered as “trial”. It refers to a crisis which tests us, pushes us to the limit, a crisis in which we may fail the test and fall away from God.

That was how the word is used in Luke 22:31, to describe Satan sifting Peter as thoroughly as wheat is sifted, by overwhelming him by a temptation to despair after his denial of Christ. That is how the word is used Revelation 3:10, to describe an hour of persecution and seduction that was coming upon the whole world. St. Paul often spoke of how Satan would send persecution in an attempt to overwhelm Christians in hope they would apostasize. He spoke of Satan hindering him from coming to Thessalonica by persecuting him (1 Thessalonians 1:18), and of suffering a multitude of insults, distresses, persecutions, and difficulties as a messenger of Satan (2 Corinthians 12:7, 10). St. Peter referred to Satan prowling about like a hungry lion, seeking someone to devour—i.e. through persecution inducing apostasy (1 Peter 5:8). St. John spoke of Satan cast out of heaven at the Ascension of Christ and coming down to earth in wrath, making war against the saints through persecution (Revelation 12:9f).

In the Lord’s Prayer, therefore, it seems that peirasmos refers to an hour of trial that comes upon in the form of persecution. In this petition, we pray that we may withstand the assault. The Lord issues the same call to faithfulness in the fire when He refers to the persecution and difficulties coming upon the Church just before the final end of the age: “That day will come upon you suddenly like a trap…Keep on the alert, praying that you may have strength to escape all these things that are about to take place and to stand before the Son of Man” (Luke 21:34-36). Peirasmos will come to all who serve Christ in this wicked and perverse generation, for the Evil One wars mightily against us. May we all be delivered in that hour, and stand before the Son of Man at the Last Day.

In Praise of Old Wolves

Many decades ago, I was a Wolf Cub. This is not, of course, a confession of lycanthropy, but…

Who Is My Neighbour: the Rise of a Snitch Culture

The current Covid pandemic is leaving many people scrambling, doing their best to navigate through (the now proverbial)…

The Works of the Law

Many of our converts at St. Herman’s church in Langley come from the Evangelical churches, and some begin…

Most viewed articles
Into the Heart of the Capitol210
Admitting That We Hate120
Number of Christians Murdered for Faith Rose 60 Percent in 2020: 50 Most Dangerous Countries to Be a Christian104
Funeral for Metropolitan Philaret Held in Minsk86
Building a Fire and Preparing for Theophany53
Homily on the Circumcision of Our Lord Jesus Christ41
Churches to Reopen in Greece on January 1825
God Is With Us… And Nothing Else Matters1
Most popular authors
Archpriest Stephen Freeman210
Archpriest Michael Gillis120
Pravmir.com team110
Charlene Aaron104
Fr Gregory Scratch53
Protopresbyter George D. Konstantopoulos41
Maria Trushanina1
Fr. Gabriel Bilas1