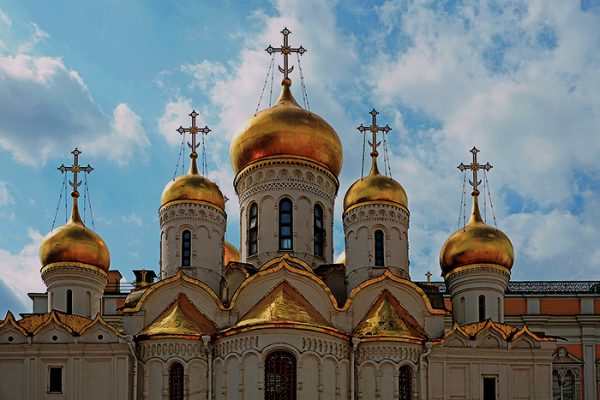 In the Creed we also confess faith in “one baptism for the remission of sins”. By this we do not simply mean that the Church should never baptize a person a second time (though this is true). Rather we mean that wherever one is baptized, and by whomever one is baptized, that baptism remains one and the same, and bestows the same salvation. Baptism is not more holy or effective in Jerusalem or Rome than it is in Vancouver or Langley, and baptism does not bestow a greater salvation if a living saint does the baptizing than it does if the baptizing priest is rather dull and mediocre. Christ offers the same regeneration, forgiveness, and sonship through baptism regardless of where the baptism is received and by whose hands it is given. Thus baptism remains one and the same baptism throughout all the world.

This is because Christ has pledged His presence whenever His people assemble in His name regardless of their location, and Christ’s presence is full and indivisible. In His final high-priestly prayer He prayed that the Father would give them the gift of this unity by uniting them to Himself. He prayed that those who believed in Him “may all be one even as You, Father, are in Me and I in You, that they also may be in Us. The glory which You have given Me I have given to them that they may be one even as We are one” (John 17:21-22). The words “that they may all be one” have been badly misunderstood. They are often used in ecumenical contexts to express the happy hope that all denominational divisions will eventually be overcome, and all the various denominations will join together to become one single church. This, it is said, must surely happen one day because Christ prayed “that all may be one”.

But these words were not uttered against a background of denominational division in a fractured Christian world, but prior to the day of Pentecost. They do not express the hope that the existing divisions will be overcome, but the promise that that division will not occur. Because of the gift of Christ’s glorious presence among His own, from the day of Pentecost on the Church will have the gift of the unbreakable unity that unites the Father and the Son. Disunity and division between the Father and the Son is impossible, and because of Christ’s prayer, disunity and division among His followers will also be impossible.

This unity manifests itself in a unity of faith and life—i.e. in all the members of the Church holding to the same beliefs and the same standards of righteous living. This unity of faith was all the more impressive in the early Church when one realizes the incredible diversity that existed then. In those early days, a church in one city was very different from the churches in other cities. Each local pastor (i.e. each bishop) made up his own anaphora or Eucharistic prayer at the Liturgy, each one used different prayers at baptism, each one read from different parts of the Scripture at their Sunday Liturgy (i.e. used a different lectionary), and even had a different New Testament canon, with some churches (for example) reading the Book of Revelation as scripture, and other churches not reading it as scripture.

But despite this wide diversity of liturgical praxis the essential faith underlying it was identical: they all believed the same things about Christ, about the human dilemma, and about the way of salvation. This basic set of beliefs (sometimes called “the rule of faith”) united all the churches throughout the whole world. The Church was one not only because that wherever it assembled it encountered the same Christ, but also because wherever it was scattered throughout the world it confessed the same faith.

What does this mean for us practically today? I suggest two things.

First, it means that our ecumenical task is to help Christians divided from the Church by accident of history reach the fullness of the truth. There can be no shortcuts to Eucharistic hospitality. The Church’s unity remains rooted in the truth, both of faith and morality. We might be tempted to look at the disappointed faces of our Christian neighbours when the Eucharist is denied them at our Orthodox Liturgy and to lower the historical bar. We must look less at those disappointed faces, and more to the unborn faces of our grandchildren, for they will not thank us if we dilute and pervert the faith, and pass along to them a damaged inheritance. We also would do a disservice to our separated brethren by telling them that truth matters less than their feelings, for certainly they care as deeply about the truth as we do.

Secondly, we must recognize that schism and defection from the unity of the Church always begins at the local level. At the beginning of every heresy and resulting schism, someone somewhere disagreed with someone else in the local congregation, made a fuss, hardened his heart, and then left to start his own group. The Fathers hated schism not just because the schismatic heretics got their theology wrong, but because they recognized in the schism a failure to love. We may not let local quarrels lead us into schism or lead us to start new churches, but loveless quarrelling still damages our souls nonetheless. It is as St. James said: in our local congregations we must all be quick to hear, slow to speak, and slow to anger (James 1:19). Charity begins at home, both in terms of almsgiving and ecclesial unity. To confess belief in one church is to take upon ourselves the responsibility to love, to forgive, and to heal our quarrels quickly. Only by so doing can we let love be the perfect bond of unity, maintaining the unity of the Spirit in the bond of peace.