The Power of Christian Marriage

Source: Eastern Christian Insights
Our challenge is not only to say words about marriage, but to live them out in ways that draw others to Christ and His Church.
Priest Philip LeMasters | 08 July 2015 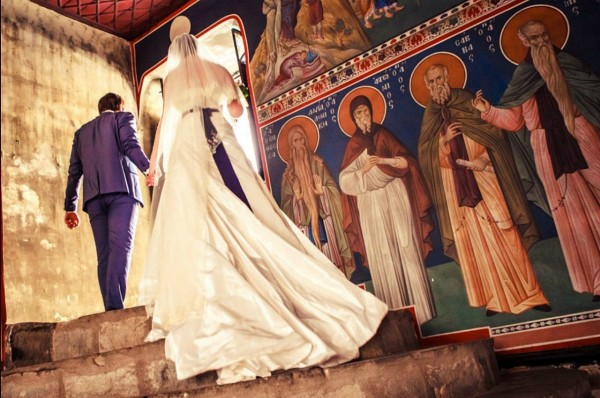 Orthodoxy Christianity affirms the unique glory of the life-giving union of husband and wife as an icon of the Holy Trinity and of the salvation of the world. Marriage is a holy mystery, a sacrament, which does not simply grant civil sanction to the broken union of Adam and Eve; instead, it heals and blesses their common life as a sign of the relationship between Christ and the Church.

Man and woman wear the crowns of the Kingdom as their love for one another finds its true fulfillment in the Lord. God created us male and female in the divine image and likeness, giving opposite-sex couples the unique ability to bring forth new life from their own bodies out of love for one another. Through this blessed union, parents and children become an image of the Holy Trinity, sharing a union of love that binds them together and enables them to learn to love Christ in one another. By the restoration of the primal unity of male and female in God, Christian marriage becomes a sign of the salvation not merely of two individuals, but of all humanity and of the creation itself. Perhaps that is why our Savior so often used the image of a wedding feast for the Kingdom of God.

The Orthodox Church knows that man and woman are not interchangeable bundles of individual rights; instead, the two sexes play complementary roles in our common salvation. Jesus Christ and the Theotokos, the apostles and the myrrh-bearing women, St. Macrina with her brothers Sts. Basil and Gregory, and so many other examples from Scripture, hymnody, icons, and the saints demonstrate the abiding mystery of the male-female distinction and relationship in our pursuit of theosis. The same God who creates us as male and female saves us in relationship to one another. Instead of abandoning biological distinctions as though our bodies were irrelevant and the two sexes identical, we look to the Lord, His Mother, and ongoing generations of holy men and women to teach us how to live faithfully in relation to one another as male and female. We deal here with a great mystery, as the Logos who spoke the world into existence also made us man and woman in the divine image.

The early Christians impressed even the pagan Romans with their care for the dying and their rescue of exposed infants. It’s time for the current generation of Orthodox Christians to impress our society with the chaste love of man and woman as a sign of God’s covenantal fidelity in Jesus Christ. There is no better response to the challenges posed by the ongoing sexual revolution than the living icon of Christian marriage—of Adam and Eve healed and blessed as they wear the crowns of the Kingdom and bring new persons into the world out of their love for one another. That’s how God intends life to go on in His good creation. It’s precisely the differences between male and female that make the union of marriage life-giving, complementary, and a path to salvation. True marriage manifests the healing of our humanity in the image of God as man and woman.

Our challenge is not only to say words about marriage, but to live them out in ways that draw others to Christ and His Church. That’s the most fundamental political action of the Christian community: to embody a life that conquers death, that heals our broken, corrupt humanity—body and soul, male and female. Jesus Christ still turns water into wine by manifesting His divine glory through faithful, loving marriages that are living icons of what happens to men and women when they together become participants by grace in the divine nature.

In contrast, revisionist claims about “same-sex marriage” distort the truth about what it means to be man and woman in God’s image and likeness. They endorse sexual expression apart from the loving, covenanted unity of male-female difference that alone is blessed to bring forth new life. Though Christian and civil marriage are not identical, Orthodoxy will not embrace proposed redefinitions of the fundamental nature of marriage contrary to what God has established from the origins of the human race. The Church cannot bless same-sex unions as marriages, for that is not what they are. Sacraments restore persons and their relationships according to God’s original intention for us to be like Him; and He created us male and female in His image toward the end of our salvation.

Faithful Orthodox Christians do not, however, hate or shun those who order their lives differently. Like the Samaritan woman who became St. Photini, those who struggle with disordered sexual passions are more likely to respond to genuine expressions of compassion that point them toward the living water that satisfies at a level deeper than physical desire. The Church must speak the truth about sexuality, but also about pride and self-righteous judgment. Given the Lord’s definition of adultery in the Sermon on the Mount, none of us is in the position to condemn others for sexual sin.

No, God does not call everyone to marriage; yes, He does invite everyone to holiness; preserving sexual intimacy for the blessed state of marriage between a man and a woman is part of that calling, as the Church has taught consistently for two thousand years. In our current cultural context, the witness of true Christian marriage simply must become visible, vibrant, and robust, if it is to be taken seriously by mainstream culture. All the more is our need to be vigilant in our parishes and families, in our friendships and neighborhoods and schools, in our choices of entertainment and attire, to form ourselves in chastity both in our bodily actions and the thoughts of our hearts. Of course, we never do that alone, but in communion with the Church and with the support of fellow Christians who want to participate more fully in the eternal life of the Holy Trinity.