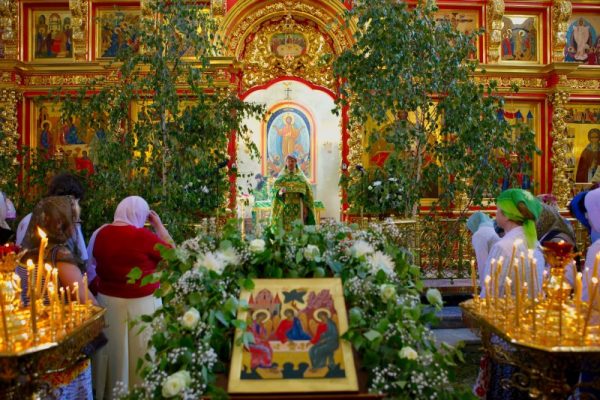 Saint Athanasius says, if Christ revealed Himself to the world only to amaze people, it would mean He had come just to put on a show – and that is not the reason Christ came to us.

Brothers and sisters, there is a great appetite today for a great leader, to give us a great show – a great spiritual show, a great political show.

This is not the reason Christ revealed Himself.

There is a great desire today for a quick solution – an inoculation – against physical sicknesses which might lead to death.

This is not the reason Christ revealed Himself.

There is a great hope today for a political plan that will unite all peoples and bring equality to all mankind.

This, too, is not the reason Christ revealed Himself.

If we are looking for a good show, that is all we will see – and we will miss the real point of what God is doing in the world.

If we are looking for a show, that’s all we will get.

The human race has suffered from death since the fall of Adam and Eve: yet we still behave as if death is something shocking, or something we can avoid if we just find the right government program.

On top of this, our nations have suffered from divisions – wars, political and economic inequalities, poverty, and racial hatred – since the time of Cain and Abel, and the Tower of Babel: yet we still behave as if we are going to wiggle out of these problems by making noise and making plans. Oh no…

Our two sicknesses – death and division – are universal.

Because our two sicknesses – death and division – are spiritual problems which have their root at the foundation of human existence.

You think you are going to undo that by yourself?

You think the government is going to undo that?

You think a mob is going to undo that?

There is a reason the Church celebrates Pentecost – the day on which Christ sent the Holy Spirit upon the Church.

It is the day the Church had been waiting for… not for a few weeks.  For centuries!

The Church – say the Holy Fathers – had existed since before the foundation of the world.

The angels were part of the Church, and existed before the sun and moon, says Saint Clement of Rome.

What the Church needed – what the world needed – was the power of the grace of the Holy Spirit, that was poured out on the Day of Pentecost, in the form of fiery tongues on the apostles.

This was the beginning of their priesthood – the priesthood of the historic Orthodox Church.

But it was more than that.

It was the unity the world was lacking.

Because, you see, the power of God – the Holy Spirit – is the only thing that can bring unity to divided people.

That is the reason God allowed all those different people on Pentecost to hear the apostles speak in their own languages – all at the same time!

This was not a miraculous English as a Second Language class!

This was a manifestation that, by the power of God, all people, all races, within the historic Church, the Body of Christ, are unified. We are united.

Outside the Church, peoples of all nations remain at odds and divided.

Inside the Church – in Holy Communion and the other Holy Mysteries – there is One Race of Orthodox Christians… and anyone who teaches differently stands against the life and witness of the saints and martyrs of the Lord Jesus Christ.

Saint Augustine, Saint Leo the Great, and Saint Cyril all attest that the miracle of Pentecost shows to them and to us that the Church is universal – it is given for everyone to enter who accepts holiness of life.

Everyone who drinks from the chalice of life – the Blood of Christ – has the same blood.

They are one people.  Only Christ’s Church heals this greatest of human problems.

Brothers and sisters, Christ did not come into the world to put on a show.

And He did not send the Holy Spirit upon His apostles to put on a show.

Christ healed the ancient curse of death by dying on the Cross, and rising on the third day.

But he also healed the ancient curse of division, by sending the Holy Spirit into the world, to unite those baptized into His Body in the historic Church.

And that is the fulfilment of the great hope that many of our people need to know about in the times we live in today.