Source: Interfax-religion
Natalya Mihailova | 09 February 2016
Moscow, February 9, Interfax - The Moscow Patriarchate expects sincere and deep conversations between Patriarch Kirill of Moscow and All Russia and Pope Francis of Rome in course of their meeting in Havana on February 12. 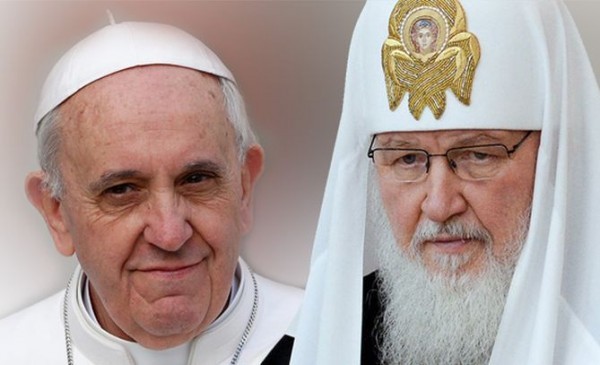 “It is discussed that they could meet in a church, and finally the announced meeting point is an airport, almost the waiting area, but it is very symbolic. The conversation will take place at a crossroad of the two roads. An airport is a symbolic crossroad. When people meet at a crossroad, their meetings are short, but sincere and deep,” first deputy head of the Synodal Department for Church, Society and Media Relations Alexander Shchipkov said in his interview with the Izvestia daily.

“Here, those who meet speak frankly about most important things, putting aside other things that can also be important, but not in the moment: everything is not so important when we speak about people’s blood, about real lives,” he said.

Shchipkov also said about his own interpretation of the symbolism of this meeting “at the waiting area of an airport of the small, but strong and freedom-loving country.”

Commenting the fact that the main theme of the meeting is genocide of Christians in the Middle East, he said that each of the Churches independently took various steps to prevent murders of Christians in different parts of the world, to extend them both practical and political help.

“Today, we say that genocide of Christians intensifies and heads of the Churches meet to stop this slaughter, to influence the politicians, to understand what we can do by mutual efforts,” Shchipkov said.