His Holiness Patriarch Kirill Meets With Ambassador Of France To Russia

Source: DECR
Natalya Mihailova | 01 February 2018
On 23 January 2018, His Holiness Patriarch Kirill of Moscow and All Russia met with H.E. Sylvie Bermann, the newly appointed Ambassador Extraordinary and Plenipotentiary of the French Republic to the Russian Federation. 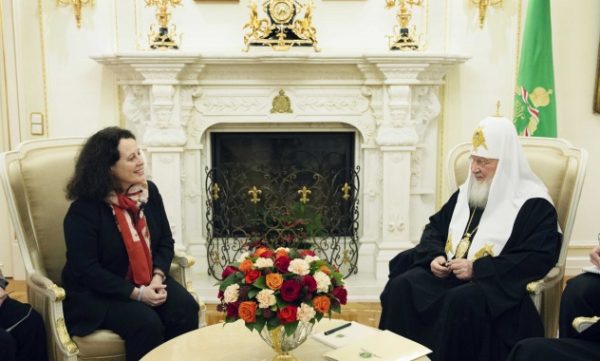 They were joined in the meeting, which took place at the Patriarchal and Synodal residence located in St. Daniel’s stavropegic monastery, by Archimandrite Philaret (Bulekov) vice-chairman of the Moscow Patriarchate’s Department for External Church Relations; Minister-Counsellor of the Embassy of France Paul-Bertrand Barets, and the first secretary of the Embassy Natalie Dupont.

The Primate of the Russian Orthodox Church warmly greeted the guests and expressed his hope for the development of working contacts with the French diplomatic mission in Moscow.

His Holiness said that special relations have been traditionally maintained with France, noting the meaning of their cultural component. “I closely monitor contacts between our countries in the sphere of culture and must say that important events in the cultural life of Russia and France take place every year. We believe that relations in this sphere must develop as people in our countries appreciate and like them,”

“Our compatriots feel good in France. They maintain close contacts with the Motherland, many have integrated in French society, and this is an important factor in our relationship.”

His Holiness called the consecration of a new Russian cathedral in Paris an important event in bilateral relations: “This event has told a lot to the world, especially about the nature of our relations at the popular level and in the sphere of culture.  At my meeting with the then President of France François Hollande after the consecration of the cathedral, I told him that I could not think of any other European capital in which the construction of a Russian Orthodox church was viewed with warmth and enthusiasm. This shows the openness of the French people and society and our deep-rooted cultural ties.”

His Holiness continued to say, addressing Ambassador Bermann: “You have come to the country which leans to your country, and I do hope that your work in Russia will be conducive to the continuations of this wonderful tradition.”

Ambassador Bermann thanked His Holiness for a warm welcome and said that her aim as an ambassador was to strengthen our relations in politics and in the sphere of culture and other spheres as well. She noted the importance of the visit of His Holiness Patriarch Kirill of Moscow and All Russia to France for the consecration of the cathedral church and the Orthodox Spiritual and Cultural Centre in Paris and said that at that time she served as the ambassador in London and as yet had no time to visit the Centre. “I know that people are interested in it and appreciate it value, and I hope to visit the Centre on Branly Embankment in Paris,” Ambassador Bermann added.

His Holiness and the Ambassador of France also discussed peacemaking ministry of the Ukrainian Orthodox Church.