In Western Christendom, unfortunately, theology came to be just this - the knowledge about God. Unlike the Christian East, theology became something scholastic, something appropriated to academicians who conversed with each other over philosophical abstractions. Even today, the discipline of theology in most American seminaries, both Roman Catholic and Protestant, remains, for the most part, thoroughly scholastic.
Fr. Paul Jannakos | 12 January 2010

In the Orthodox Church we believe that God reveals Himself to us in truth. This means, basically, that as human beings we have the inherent ability to know God directly and simply i.e., personally. Just as Enoch and Noah “walked with God,” (Gen. 5:24, 6:9), and just as Moses “spoke with the Lord face to face, as a man speaks to a friend,” (Ex. 33:11), so are we able to enter into the same intimate communion with the Triune God. The knowledge of God that is the outgrowth of becoming united with Him is what we call theology. As such, all genuine theology is not merely the knowledge about God, but the knowledge of God – because it is experiential in nature. 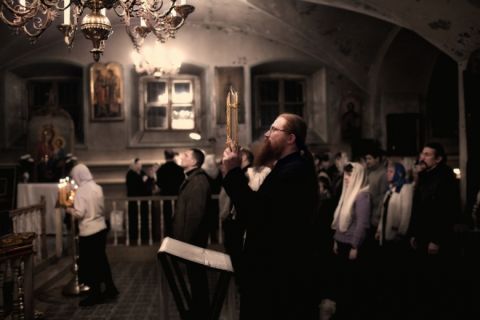 In Western Christendom, unfortunately, theology came to be just this – the knowledge about God. Unlike the Christian East, theology became something scholastic, something appropriated to academicians who conversed with each other over philosophical abstractions. Even today, the discipline of theology in most American seminaries, both Roman Catholic and Protestant, remains, for the most part, thoroughly scholastic. Some of the more “liberal” theologians have even gone so far as to conclude that nothing reliable can ever be known about God. According to this line of thinking, God (or whoever he or she or it happens to be) is so far above and beyond our human realm that he/she/it cannot be understood.

For this reason theology has become meaningless to the majority of people in our country. And why not? For if theology is nothing more than an academic pursuit consigned to an intellectual minority, then what good is it? If one begins the discussion with the declaration that God cannot truly be known, then why would anyone want to bother with it in the first place? No doubt this is the source of the disinterest and disdain that our society displays towards what we as Orthodox Christians call the “science of sciences.”

Even so, it is important for us to remember what St. Gregory the Theologian once said. “For we do not theologize in the manner of Aristotle, (that is in the abstract way of the philosophers), but in the manner of the fishermen” – referring of course to the Holy Apostles. For St. Gregory, theology is the outcome of the living encounter with God the Father, through His Son and in the Holy Spirit. St. Anthony the Great touches on this as well when he says, “The theologian is the one who prays, and the one who prays in the theologian.”

Here, too, we arrive at the greatest miracle of the faith. God is true first because He transcends all of creation. God’s nature lies beyond all earthly categories, and this is why we call God “Holy.” For that which is holy is totally “other-and-beyond” anything created. But this is not the end of the story, because the God Who is holy is also the same God Who has come near to us on account of His great love. In the language of the New Testament, the Son of God has descended from His throne and entered into the human realm by taking upon Himself the “semblance” of a servant. The great abyss that existed between God and man, between heaven and earth, and between the eternal and the temporal has been overcome in Christ. As a result, it is now possible for us as human beings, through repentance, to be glorified with Him in heaven. In the Son of God, as St. Basil prays in his liturgical anaphora, “we have been brought to the knowledge of one, true God.” And it is this knowledge that is our salvation.