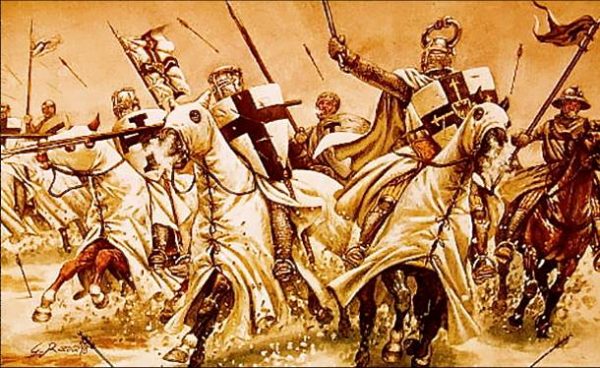 A growing number of people today believe that nothing has caused more bloodshed through the ages as has religious hatred and intolerance. Notwithstanding the obvious inference to the violence undertaken by extremist Muslims in the West since 2001, they site what appears to be ample evidence throughout human history in order to validate such an argument. The “holy wars” of the crusades during the Middle Ages are the most obvious example. The 30 Years War in Europe (1618-1648ad) fought between Protestant and Roman Catholic principalities was especially destructive. More recently, one might also point to Bosnian war in the 1990’s and the internecine warring that is presently raging between Shiite and Sunni Islamic sects in the Middle East. As the atheist Sam Harris has recently penned, “Religion is as much a living spring of violence today as it has been at any time in the past.” And it is this “blatant” correlation between blood and faith that is leading growing number of Americans to loath organized religion in every form.Such ideas, however, are nothing new. Tracing back Western civilization several hundred years reveals the same attitudes and assumptions by the Enlightenment thinkers of the 17th and 18th centuries who portrayed no less of the same loathing for the religion of their own day. It was this kind of religious revulsion exemplified by Voltaire that formed the basis for the emergence of the secular state.

Subsequently, the Western Enlightenment that began in the 18th century gradually unhinged European culture from its Christian roots by “liberating” the Western mind from its “captivity” to Christian Protestantism and Roman Catholicism. People were told they no longer need to live in fear an angry, vengeful deity who doesn’t even exist. No longer must they bow in obeisance to bishops and priests who propagated a religion that denies enjoyment in this life in favor of a future life that isn’t even real. The only life that is real, and the only life that matters, for the enlightenment thinkers, is life in this age. There is no such thing as the human soul. The Bible is a hoax. Religion is a sham. The Church’s promise of an eternal Kingdom is a mindless fairy tale that has no credibility. It is no longer the soul that needs to be saved, but the mind that must now be redeemed from centuries of religious ignorance, bigotry, and superstition.

Born out of the reformation’s incessant political conflict, this new secularism, especially in its most virulent, atheistic form, sought to move people from the realm of speculative theology to the ground of pure and natural reason. In this new world, faith in a higher, divine power would no longer be necessary. From now on, the world and everything in it could be understood objectively and scientifically – through the cultivation of the intellect. Age-old problems that beset the human race would be soon be solved. Democratically elected governments would provide freedom and justice for all. Science, set free the shackles of religion, would make new and breathtaking discoveries. The progress of industry and technology would enrich human life in ways which were previously unimaginable. A proper, liberal education would be made available to all, rich and poor alike. New medicines would cure a host of diseases that heretofore killed millions. Endemic, generational poverty would disappear for good. The emergence of free-market capitalism would level the economic playing field thus making, for the first time in human history, the acquisition of property, wealth, and the “good life” available to all. The exaltation of the human mind would rule the day. Peace would everywhere reign. A new world was being born.

But the world born out of the Enlightenment was more frightening than it was new. The French revolution, itself the banner of a new society based upon the ideals of liberté, égalité, fraternité, swiftly degenerated into an orgy of treachery, paranoia, and bloodshed as prince and philosopher alike were devoured by the novus ordo (“new order”) of secularist government. Other nations watched in horror as the Paris revolution became more and more chaotic and ruinous. Katherine the Great, who was initially enamored with the philosophical and social ideologies of the enlightenment, quickly changed her mind, thereby delaying the liberation of Russian serfdom for nearly another 100 years.

The bastard gamine born from this political chaos was a short, irreligious, power-hungry Corsican who, after brandishing his tyranny over his post-revolution homeland, afterwards plunged the entire European continent, Russia and Britain included, into a series of wars that made the reformation wars of the 16th and 17th centuries look like child play. The battle of Waterloo put the bloodletting to a temporary rest. But for England in particular, these Napoleonic wars plunged the nation into an economic depression that would not be overcome until the middle of the 19th century. Looking back on this allows for a second look at whether or not “religion causes more harm than good.” The post-Christian European age quickly proved itself just as capable of human massacre as any of its previous forbearers.

The 20th century, however, really takes the cake, revealing the total folly of any argument claiming that religious belief is the driving force behind human violence. Historians now estimate that the mutual casualties of WWI (20 million) and WWII (50 million) amount to more human beings killed during the first half of the 20th century than an all the previous centuries of human history combined. (My italics). And, as any 8th grader is now knows, these horrific wars of the 20th century were driven, not by any religious ideology, but by nationalism, (WWI) fascism, and atheistic communism (WWII). So, as David Bently Hart writes, “the historical evidence of the 20th century demonstrates that – far from bring an end to intolerance and cruelty [of religious institutions], these [political ideologies] proved themselves quite capable of incubating social evils more monstrously brutal, heartless, and violent than any hitherto imagined… showing the postmodern collapse of confidence in the Enlightenment project.”

So, for Hart its all about body-count. For every single person killed in the name of religious intolerance, there are 1000’s and 1000’s more who have been slaughtered upon the altars secular ideology. Fittingly, it is high time for those are capable of any reasoning at all to repudiate once and for all the lunacy of the idea that religion is the principle cause of war. The true reason for the bloodshed is quite simple actually: the human race has an inclination towards hatred and violence towards its own kind that is unparalleled anywhere else on the planet. And unfortunately, this will be so until the end of the age.