The Thank You Tree 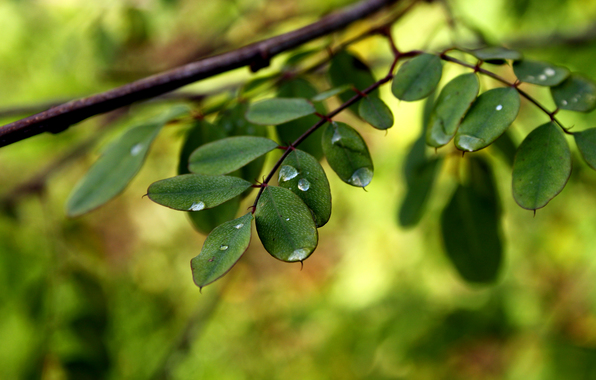 One of my parishioners tells the story of how, when she was a university student, God helped her keep her relationship with God alive through a sacramental encounter with God through a tree.  As many young people do when they go off to university, this young woman stopped going to church.  It wasn’t as though she was running away from God, but the Pentecostal church culture she had grown up in just wasn’t doing it for her.

One morning as she was walking to class, she turned a corner and saw the sun shining behind a tree glistening with droplets.  The site was so overwhelmingly beautiful that she had to stop and pray.  Right there on the path, she had a sacramental encounter with God through the beauty of the sun shining and refracting through the thousands of drops of water hanging from the edges of the leaves on a tree.  When she came out of her reverie and realized that she had to hurry on to her class, as she passed under the tree, she reached out to one leaf and took a drop of water that hung from it and anointed herself with it saying Thank you.

Every morning after that, when she passed that way to go to class, she reached out to one of the leaves of that same tree and took a drop of water to anoint herself with and say, thank you.  She began to call the tree the Thank You Tree.  And she was amazed that every morning, the tree had a drop of water for her—which would probably be even more amazing most other places in the world, but on the Pacific Coast of Canada, wet trees are rather the rule than the exception.  But more to the point, her daily encounter with the Thank You Tree became a sacramental encounter for her, a means by which she kept her faith in God alive.

Many years later, this young woman encountered the Holy Orthodox Church.  She was drawn to the the mystical theology the Church and sacramental nature of its worship.  For the past several years, the memory of the Thank You Tree had sustained her and taught her to look for God everywhere, to encounter God sacramentally in as many places as she could.  In fact, as she stood at the doors of the Church one of her serious concerns was this: Would the veneration of specific sacramental objects (specifically icons) lessen her encounter with God through beauty in nature, music and in other often unexpected places?

Others have had a similar experience with prayer.  That is, before encountering Holy Orthodoxy, they have had genuine encounters with God through prayer in the form of speaking their thoughts to God.  For them, real prayer consisted of telling God what the problem was and how they would like God to fix it.  And for those used to praying this way, the set prayers of the Orthodox Church seemed to be a hinderance to real prayer rather than a help.  However, what they find is that praying set prayers actually teaches one to pray.

I often tell converts who struggle with this that they should continue praying as they have always prayed, but to add to their prayers some of the morning and evening prayers of the Church.  As they faithfully say the prayers of the Church, they often experience a change in the way that they say “their own” prayers.  As the prayers of the Church teach us that God already knows what the problem is and how to fix it, and as we come to know this to be true through our actual experience in prayer, then less and less does it feel necessary to see prayer as a time in which we explain things to God.  More and more, prayer becomes a time of communion, often silent communion, as the words of the Church prayers become memorized and require less thought, and prayer becomes more about just being before God rather than talking to God.

People inquiring into the Orthodox Church are sometimes afraid that the Church might take away from them something very important to their relationship with God, something that has had great meaning to them and has helped them along the way.  But this is seldom the case.  Generally what people find is that the Church provides a context in which what was good before can become better, more deeply understood, and more sanely practice.

For example, before I was Orthodox I was a Charismatic/Pentecostal Christian.  One aspect of that way of being a Christian that was very meaningful to me was what we called prophesy or word of knowledge.  It is a little embarrassing for me now to say these things, but at that time it all made sense.  If we had a dream or a thought or a picture in our mind and it turned out that what we had dreamed or thought or seen in our mind somehow helped us or someone else, we would say, “God told me this.”  This culture in which we encouraged one another to try to see or hear things that we thought were from God and say them to one another.  And sometimes, these words we gave to one another were amazingly bang on and brought a great deal of encouragement.

Now I don’t want to try to parse out right now how much of what we were doing was merely psychological, how much was genuinely spiritual and how much was possibly demonic; but I do want to say that God was at least involved in enough of what we were doing to lead us to the door of the Holy Orthodox Church.  But standing at the door of the Church, we wondered (or at least I did), how would these “gifts of the Holy Spirit,” as we understood them, function in a Church setting were people do not lay hands on one another and prophesy and are not encouraged to give each other “words from God.”  Well, we did come into the Church, and with time we found answers to our questions.

At first, though, it was a kind of death.  We had to let go of some ways of doing things, committing them to God and trusting that what the Church had to offer would be enough.  And it was enough, more than enough.  We began to learn about stillness, holiness, and humility—topics that never seemed to come up much before we came into the Church.  We began to learn about the importance of not drawing attention to ourselves, of taking the lowest seat, and of praying in secret.  We began to learn about very holy men and women who do speak words from God, but never, ever called them that.  They just speak, humbly, peacefully and with love.  They are men and women whose holiness is manifest in peace, gentleness, and kindness, whose life is a disciplined cycle of prayer, work and self control.  There the word of knowledge and prophetic word has its place in the Orthodox Church: in the mouths of men and women who have been purified of their passions and who draw no attention to themselves.

We began to understand that God is interested in our sanctification, our transformation into His Image.  We began to understand that intimacy with God came through silence.  And we began to see that our confidence that the words we heard or saw in our minds were “from God” was rooted in a kind of pride born of insecurity.  Yes, God may indeed speak to us or show us things, but how much of what we hear or see in our minds is really of God or of the devil or of our own confused psyches we really could not know.  And that’s fine because if God wants to say something through me to someone, what I think about it is irrelevant.  In fact, I am better off if I do not know that someone is being encouraged by God through something I do or say.  It’s better for me to assume that my mind is too confused to hear anything clearly.  It’s better for me and others not to think of myself as one “being used by God” or to think of myself as one “who has a gift or a ministry.”  It’s best just to humbly be, to trust in God, but to doubt myself; to repent, to love and to leave the giving of words to those who through holiness have purged themselves of passions.

This was my experience coming into the Holy Orthodox Church.  What was best and most meaningful of what I had before the Church was renewed and expanded and deepened in the sea of the Holy Orthodox Tradition.  Yes, some of the techniques and attitudes were left at the door.  Yes, there was a letting go, a little death into a glorious resurrection.  But when I think back I see that I have lost nothing.  I have lost nothing and gained so much.