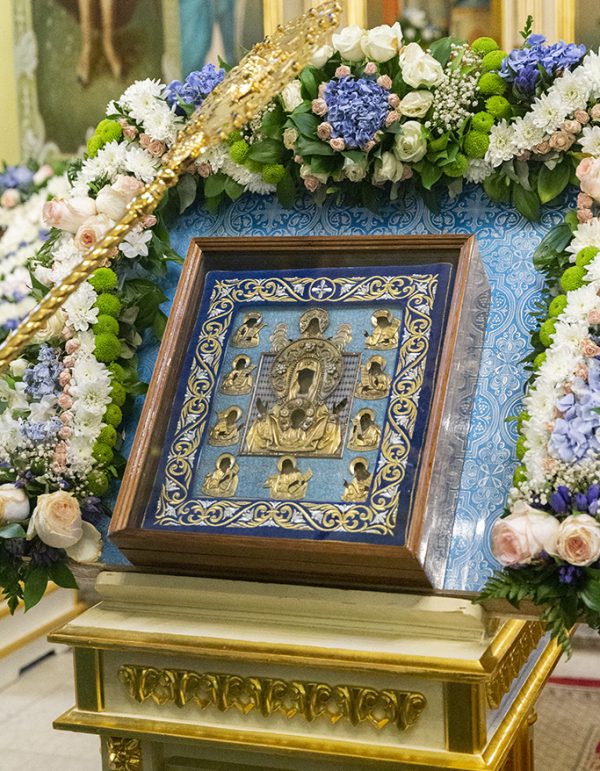 On the evening of August 28, 2019, the people of Saratov, Russia, bid farewell to the Kursk Root Icon of the Mother of God “of the Sign,” which had visited the region since August 20.

Moleben and akathist services were performed before the miracle-working icon every day. His Grace Bishop Nicholas of Manhattan, the caretaker of the icon, performed the final moleben on the last day, joined by the clergymen of the Saratov Diocese. He delivered a heartfelt sermon to the local worshipers, noting that they should not grieve that the visit of the image of the Mother of God concluded, for She is always with us.

His Eminence Metropolitan Longin of Saratov and Volsk then venerated the icon and offered his Archpastoral blessings to all in attendance. The parishioners and guests then sang prayers as the icon departed.

Over the nine days of the visit of the Kursk-Root Icon to the Saratov region, over 18,000 people venerated it, including pilgrims from Volgograd, Penza, Balashov and Volsk. Over 120 volunteers—parishioners of Pokrovsky Cathedral and other churches–took shifts in the presence of the icon.

On August 22, the icon was taken to the Great Hall of LV Sobinov State Conservatory of Saratov, where a joint Russian-American men’s choir comprised of PaTRAM (The Patriarch Tikhon Russian American Music Institute), the choir of the Moscow Podvorie of Holy Trinity-St Sergius Lavra and the Archbishop’s Choir of the Saratov Metropoliate, gave a concert under the direction of renowned director Vladimir Gorbik.

The Kursk-Root Icon of the Mother of God was discovered in September, 1295, not far from the city of Kursk, which had been burned to the ground by Tatar-Mongol invaders. It is called the “Root” icon because according to tradition, a local hunter saw it lying face-down at the root of a tree. When he lifted the icon, a spring burst forth in its place. History has it that in 1767, after praying before this icon, the young St Seraphim of Sarov was miraculously healed. The icon was taken out of Russia in October, 1920, traveling through Serbia, Germany, Switzerland, finally brought to the USA in 1951.

Press Service of the Saratov Diocese